UPDATE: How Many Lives Have We Saved?

While, for months, Republican legislators were insisting on a rapid reopening of businesses in Pennsylvania, Governor Wolf’s health and safety regulations created one of the most dramatic declines in both COVID-19 cases and deaths of any state in the country. After averaging 1,364 new cases per day in April and 864 in May, there was a drop to 757 in June, and after a rise in July, to 709 in August. 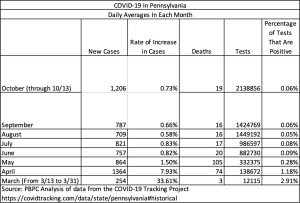 The number of new cases has been rising again and in the beginning of October to an average of 1,206 per day. But while we should always be concerned about any increase in cases, especially as we head into potentially dangerous winter months, testing has increased by about the same degree. The state was conducting only an average of 5,963 tests per day in March and 7,558 in April. But in July, it averaged 14,603 per day and has risen to 15,127 so far in October. As a result, the percentage of tests that are positive has stayed roughly the same.

So, we need to be wary of another spike in cases, but we are not seeing any imminent threat of one.

We will no doubt continue to see fluctuations in these numbers depending on vagaries in testing and reporting and how well Pennsylvanians adhere to guidelines meant to protect us as businesses reopen. But there is no doubt that the sacrifices we have made to limit the transmission of COVID-19 have had an impact. And the experiences of states that have reopened businesses early and seen sharply rising numbers of people infected and deaths have only reinforced how important our business closure and stay-at-home policies have been.

It is difficult to estimate how many cases and deaths were prevented by the business closure and stay-at-home orders—or by Pennsylvanians sensibly concluding that they should stay home and avoid patronizing businesses in person regardless of what the government requires—a complication to which I return at the end of this post. However, a recent study found that the decline in economic activity across the United States prevented 60 million COVID-19 infections and 4.8 million confirmed cases by April 6. (Confirmed cases are those who have tested positive for the infection or have been counted as cases because they have presumably died from COVID-19. The number of infections prevented is based on estimates of how many people have become infected but, most likely because they are asymptomatic or have minimal symptoms, have not sought testing.) We use a 4% rule of thumb for estimating the impact of Pennsylvania’s numbers on the national situation since the population of Pennsylvania is about 4% of the country. In this case, we see that the governor’s health and safety orders prevented 2.4 million COVID-19 infections and 192,000 confirmed COVID-19 cases in the Commonwealth. (This likely underestimates the actual number because early in the pandemic, Pennsylvania had the tenth highest caseload in the country, accounting for 5% of all U.S. cases.) If the percentage of people with confirmed cases who died were equal to the Pennsylvania case fatality rate of 4.8% of all confirmed cases, another 9,216 Pennsylvanians would have died by April 6.

These estimates do not take into account the impact of an additional 9,216 confirmed cases on the need for hospital beds. At the roughly 20% rate at which those confirmed with COVID-19 are hospitalized, Pennsylvania would have needed an additional 1,843 hospital beds in a state that has only 14,395 hospital beds and 1,098 ICU beds. There is a high probability that hospitals in some parts of the state would have been overwhelmed.

Another study reached similar results. In collaboration with the Big Cities Health Coalition, the Urban Health Collaborate at Drexel’s Dornshife School of Public Health estimated on May 11 that efforts to encourage Americans to stay at home avoided 21 million hospitalizations and over 200,000 lives were saved nationwide. Using the same 4% rule we mentioned above, the estimates applied to Pennsylvania suggest that 8,000 lives were saved and 84,000 hospitalizations avoided because of social distancing. Again, this is probably a low estimate because on May 11, Pennsylvania had a higher share of all COVID-19 cases than its share of the U.S. population.

A final study by Dr. Mark S. Roberts, the director of the Public Health Dynamics Lab at the University of Pittsburgh takes the story beyond the first wave of the disease. He told us in mid-September that the study concluded, “It’s easy to project that there would have been two to three times the deaths, at a minimum, with less social distancing. Two to three times the current 8,368 Pennsylvanian deaths comes to between 16,736 and 25,105 additional deaths.”

These different studies give us somewhat different results. That’s what we should expect when dealing with a new and little understood disease and the rapidly changing political and social environments it created. But, they all point in the same direction: social distancing and business closures saved lives.

In describing social distancing and business closures, I’ve deliberately not focused on government orders in Pennsylvania or elsewhere. For while, as we point out in another post, it is clear that government orders to close businesses and stay at home had a major impact on reducing the spread of COVID-19 and thus deaths from the coronavirus, there is good reason to believe that some—and perhaps a great deal of—social distancing and business closures would have taken place without any government orders. As Sweden’s experience and U.S. opinion polls show us, people and businesses were quite sensibly worried about becoming infected and spreading the virus to others and were taking proper precautions, even without government orders to do so. Moreover, if a delay in such regulations had caused the virus to spread more rapidly and the death rate to rise even more quickly than it did, we would have soon seen more voluntary decisions on the part of individuals to stay away from others and on the part of businesses to temporarily shut their doors.

That is not to say that the regulations put in place by Governor Wolf in Pennsylvania and governors in other states, both Democratic and Republican, made no difference. They were critical to reducing the spread of the coronavirus and saving lives. But any full analysis of their impact would have to take into account the likelihood of voluntary compliance with sensible rules of social distancing.

What can’t be denied, however, is that obedience to those rules and to wearing masks, whether carried out voluntarily or under government edict, has been critical to our safety and our health. And, as we show elsewhere, it is just as critical to recovery from the economic crisis created by the pandemic and the necessary response to it.

Sadly, despite the success of the policies put in place under Governor Wolf’s emergency orders, as of today over 170,000 Pennsylvanians have become infected with the COVID-19 virus and just under 8,368 have died. This is horrible. But we should remember that things would have been much worse if Governor Wolf had not taken aggressive steps to protect us and most Pennsylvanians had not acted sensibly in the face of the disease. We should also remember that he did so despite consistent criticism and opposition from Republicans in the General Assembly.

Note: An earlier version of this post had a serious error for which we apologize. On our first reading of the paper that helped form our initial analysis, we, like many of the newspapers that reported on the research, focused on the well-supported claim that social distancing and business closure efforts prevented 60 million COVID-19 cases from occurring in the U.S. And we used that number in calculating the number of lives saved in Pennsylvania. However, on re-reading the paper recently we noticed that while it claims that 60 million infections were prevented, it also says that this amounts to 4.9 million “cases.” The difference is that both because of inadequate testing and because many infections are asymptomatic, just below 10% of infections are discovered and become counted cases of COVID-19. And since mortality rates are based on cases not infections, our estimate of prevented deaths was seriously overstated. We said that perhaps as many as 120,000 additional Pennsylvanians might have died. The correct calculation is 9,600. We very much regret the error and have corrected it above.

Having said that, as this revised post points out, the initial calculation only considers our experience through April. More recent studies suggest that many more cases and deaths have been prevented by the state government’s restrictions on economic and other activity and by our own self-restraint.