The U.S. Has Mismanaged COVID and Has More Deaths and Higher Joblessness as a Result

The U.S. and Pennsylvania have had extensive debate in recent months about whether policymakers should focus on reducing the spread of COVID-19 or instead reopen the economy quickly because this would reduce the economic impact of the pandemic. The conservative side in this debate has suggested that there is a trade-off between virus management and economic recovery.

International evidence shows that there is not a trade-off. There is, instead, a strong association between a high incidence of COVID cases and deaths, and the increase in the national unemployment rates since the pandemic started.

Translating what this means into plain English: the U.S.—at the national level—has been a basket case in its management of COVID-19. We have suffered a lot more deaths as a result and much higher joblessness. Looking forward—if we continue to be a basket case in our (mis)management of the pandemic, we will continue to suffer higher death rates than other countries and economic impacts more devastating and that last longer.

The evidence for the claims above comes from a national analysis of data for the 25 richest countries in the Organisation of Economic Development and Cooperation (OECD) with at least four million people. This analysis by economist Harry J. Holzer shows that the U.S., as of September 9th, had experienced two-and-a-half times the death rate from COVID—0.57 deaths per 1,000 population versus 0.23 deaths per 1,000 people in other countries, on average. The basic picture has not improved for the U.S. since September 9th. At 0.69, the United States is now fourth for death rate per 1,000 population out of these 25 countries, rather than fifth as of September 9th. 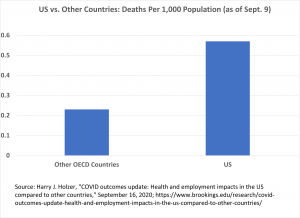 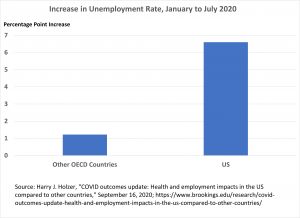 Holzer ends his updated brief by estimating how many deaths and how much joblessness would have been avoided if we achieved the average for the other 24 rich OCED countries. His answer:

These numbers drive home one basic message. The competent management of the COVID pandemic matters a lot. This impact can be measured in many millions of jobs nationally and hundreds of thousands of lives.