The budget is finished, and the legislature has adjourned for the summer. There were some wins and losses, but the big takeaway is that Pennsylvania missed an opportunity to spend the $12-billion surplus to create transformational change.

Two elements of transformational change that would have especially benefitted rural districts represented by members of the legislative majority were: (1) a minimum wage increase—which a majority of Pennsylvanians in every legislative district supports; and (2) the opportunity to use “last dollar” (Nellie Bly) scholarships—and mostly federal money—to create affordable college options leading to good jobs in rural counties that have no community college presence.

One small win was an extension of Pennsylvania’s Reemployment Fund for two years. This roughly $10 million-per-year source of state training funds is used for industry-driven training and programs that combine work and learning, such as apprenticeship, school-to-work programs, and PA’s Outdoor Corps. Republican senator Michele Brooks successfully championed this extension. 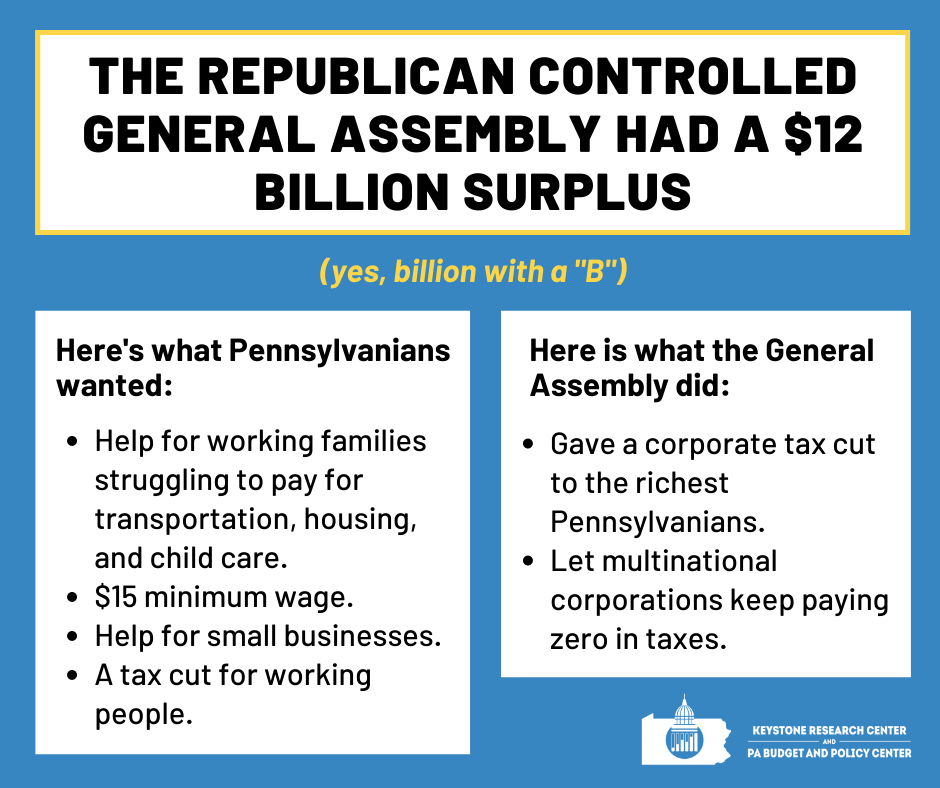 Thank you for supporting our work,

PBPC on the PA Budget: This Is NOT a Budget for the People

Marc Stier | 7/6/2022 | Statements
The new Pennsylvania Budget is a deep disappointment for Pennsylvania. At a time when the state is flush with cash, the Republican-led General Assembly has failed to meet the immediate needs of the vast majority of Pennsylvanians or invest enough in our future. Yet the budget does include an unnecessary and costly long-term cut in corporate taxes causing a one-year loss of $250 million in revenue in the current fiscal year will grow, to $2.25 billion per year at the end of eight years. Yet the state will still not ask wealthy, multinational corporations to pay anything for the services they receive from our government.
Almost nothing was done in the budget to provide relief for families struggling with the post-pandemic rise in prices for necessities like gas, child care or housing. There is a small tax credit to help low-income families pay for child care. The cost of that tax credit is $24 million, or about one-tenth of the $250 million in corporate tax cuts.
. . .
There is one positive note in the budget as it relates to K-12 education. There will be $850 million in new funding for K-12 education with $525 million added to the Basic Education Fund; $225 million for a second Level Up supplement for the 100 most underfunded school districts in the state; and $100 million for new special education funding. And there is an additional $100 million for school mental health. While this new funding is welcome, it is less than half of what Governor Wolf asked for and far less than the accumulated state surplus of more than $12 billion would have allowed.

In health-related matters, there are four positive initiatives:

The budget also includes $35 million for student loan relief for nurses. Sadly, that is the only group of indebted students the General Assembly has agreed to help this year.
One additional very welcome provision is $125 million for the whole home repair program initiated by Senator Saval. This is likely to be a program that is very helpful for low- and moderate-income families throughout the state.
Read the full statement here.

A recent joint report from the Pittsburgh City and Allegheny County Controllers estimates that the city’s five biggest nonprofits, all health care and higher education institutions, avoid $34.5 million annually in property tax payments to the city, led by the University of Pittsburgh Medical Center (UPMC) at $13.9 million. Today, a brief from the Pittsburgh Budget and Policy Center summarizes the findings of the Controllers’ report and adds new data documenting that the property tax breaks mostly benefit the more affluent and educated people served and employed by big nonprofits, leaving working people and for-profit corporations paying for the city budget.

This statement was released before the budget was passed. While this proposal was not included, please take a look below to read about the importance of the state earned income tax credit proposal.

Some discussions about providing tax relief for low-income working Pennsylvanians appear to be a part of the current budget negotiations. We want to strongly encourage the General Assembly to take such action by instituting a state version of the federal earned income tax credit.

As we have extensively demonstrated, the PA tax system is unfair, with low-income families paying state and local taxes at twice the rate of the top 1%. Our uniformity clause prohibits the graduated tax rates that make taxes fairer in most other states.

But Pennsylvania could make paying state taxes fairer by instituting a state earned income tax credit. It could also do so by expanding the existing tax forgiveness program. But the EITC would send more money to those who need it the most.

Marc Stier: We need a budget for all Pennsylvanians

“Our well-being doesn’t just depend on whether we as individuals are educated or can afford housing or child care, but on whether our fellow Pennsylvanians are also educated and able to afford housing and child care so we all can be full participants in our economy, making it possible for businesses to hire the workers they need and our economy to prosper.

And while liberals and conservatives have some disagreements about the best way to attain those goods, anyone who’s not in the foul grip of ideological dogma knows that there is a role for the public sector to play in ensuring that everyone has access to what we all need.

Unwilling to join in debates about the common good — and only willing to use an accumulated surplus of funds to help corporations — the Republican Party of Pennsylvania has been trying to make it impossible for Pennsylvanians of good will to have serious conversations about what this budget should look like.”

Earth to the Pa. Legislature: Raise the minimum wage | Opinion

By Stephen Herzenberg and Claire Kovach

“Ho hum, another year, another increase in the gap between Pennsylvania’s minimum wage and the minimum wage in our neighboring states.

Could one reason that Pennsylvania businesses in counties neighboring New York, New Jersey, and Maryland have high quit rates and struggle to fill vacancies be that Pennsylvanians keep leaving the state to go get decent jobs?”

Who runs Harrisburg? You or the corporate elite? | Opinion

By Nick Pressley and Marc Stier

“Every rumor we hear about the state budget negotiations tells us that a reduction in the corporate net income tax (CNIT) rate is possible. It is unclear whether that corporate tax cut also includes some of Gov. Tom Wolf’s “add-back” provisions, which would make multinational corporations that currently pay nothing pay something. It appears that Republicans continue to oppose closing the Delaware loophole by enacting combined reporting.

Every rumor we hear also says that raising the minimum wage may not be included because Republicans oppose it.

Are we talking about cutting corporate taxes because it is a good idea? And is raising the minimum wage less likely because it is a bad idea? I’ll come back to these questions below, but the short answers are ‘no’ and ‘no.’

If they are not bad ideas, then is it hard to raise the minimum wage and easier to cut corporate taxes because the General Assembly reflects the will of the people? Again, the answer is ‘no.’”

“Advocates for additional public school funding have said many districts that are smaller or in more urban areas are forced to rely on raising taxes.

‘When you do that, you put enormous burden on local communities and local school districts. You get high property taxes, and you get enormous education inequity. And that’s what we see all over the state,’ said Marc Stier, with the PA Budget and Policy Center.”

The U.S. Supreme Court is an obstacle to the future the vast majority want to achieve | Opinion

“Last Thursday, the U.S. Supreme Court issued a ruling in West Virginia vs. EPA that favors coal companies, limits the ability of the federal government to address climate change, and foreshadows future decisions on labor and other regulations that will favor corporations and reinforce economic inequality.

Fair enough. That’s not much of a news alert but rather what people expected from the activist conservative majority on the current court.

It’s important for the public to understand the implications of this decision both narrowly and broadly. From a narrow perspective, the Biden administration and the growing majority of Americans that recognize the existential threat of climate change need to be as creative and forceful as possible in working around the constraints created by the decision. The imperative of rapidly reducing carbon emissions is not going away.

From a broad perspective, it’s important for Americans generally to understand that the high court is a critical obstacle to the future the vast majority want to achieve—one with opportunity for all, that seeks to protect the places we love and only plant we have from the ravages of global warming, and that restores some measure of equity in schooling, in housing, in health, in environmental justice.”

RT @BuildingBack_US: We’re lowering Rx costs and getting more folks insured!⚕️ The Inflation Reduction Act will deliver on a promise Washi…
PBPC 7 August
RT @PBPC: Join us on FB Live for the last event of our #KRCGiveDay22 - the finale! Staff and some of our…
KRC_PA 3 August