SWPA Blog #6: The State of Unions in Pennsylvania and the United States

This blog focuses on labor unions. Polls show more support now for unions in America than since 1965. Unions also won more elections in the first half of 2022 than they have in 20 years, including headline-capturing victories at giant companies such as Starbucks and Amazon. Last year, in Pennsylvania, the United Steelworkers organized one of the anchor institutions of the Pittsburgh “eds and meds” economy, the University of Pittsburgh. To date, aggregate numbers on union membership do not show big trend increases—although union density in Pennsylvania stopped falling in the last decade. Even so, recent organizing successes foreshadow a possible union organizing wave like that in the 1930s. Union membership could grow quickly in locally rooted (“non-mobile”) service industries and in giant companies which, once unionized, want their competitors unionized also. There are no guarantees, of course, and whether the recent organizing wave becomes mass organizing or ebbs and decays depends partly on public policy and on whether elected officials support organizing from their “bully pulpit”—or join employers in an effort to coerce workers to not organize by threatening their jobs as they have repeatedly done in southern states such as Tennessee in recent decades. 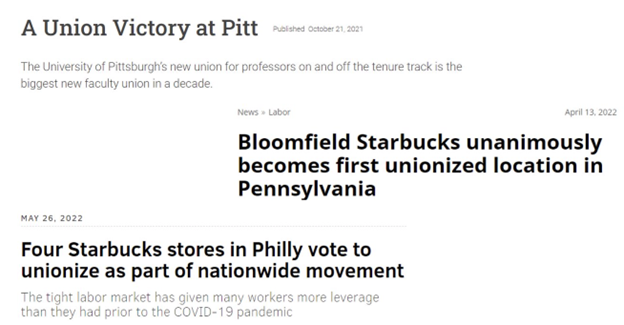 Union approval ratings have increased particularly since 2009, reflecting the “Occupy Wall Street” movement, which highlighted the problem of inequality, and the “Fight for $15 and a Union” movement. At the same time, Gallup poll support for unions never dropped below 48 percent—roughly half. Looking over the full 1937 to 2022 period, one-half to three-quarters of Americans have always appreciated that unions grow the middle class; provide a vital source of balance in our economy and in public policy; and increase overall, racial, and gender equity.

Support for unions was strongest at the height of the New Deal in the 1950s when there was a widely shared understanding of (a) how unions fit into our economy and politics and (b) that union strength benefited not only union members but the entire country. This understanding held that collective bargaining, by increasing workers’ real wages in the nation’s powerful mass manufacturing sector, sustained consumer demand, and prevented another downward spiral of buying power and the economy like the Great Depression. Unions also provided workers with protection on the factory floor against arbitrary supervision and an inhumane work pace. In politics, unions were at the core of a social democratic political coalition that fought for legislation that benefited all workers: a higher minimum wage, Social Security, and health care. (Unions led the fight for health care that culminated with the establishment of Medicare and Medicaid in the 1960s.)

Starting in the 1960s, social unrest over the Vietnam War and in America’s cities frayed the social democratic coalition. By the late 1970s and early 1980s, rising inflation and imports flooding into the U.S. market brought to public discourse a new interpretation—that unions, their wage demands, and their shop floor work rules were now part of the problem not the solution and were hurting U.S. competitiveness. But while conservative politicians, such as President Reagan, and an ascendant and well-funded right-wing network of think tanks and conservative legislators have aggressively sold this narrative for nearly half a century, it has only made a modest dent in people’s views of unions. In fact, over the last dozen years, heightened public awareness of income and wealth inequality has fueled renewed appreciation of the value of unions. Consolidation of a concrete understanding of how unions are THE answer to the very specific economic, social, and environmental challenges America and Pennsylvania face today could bring support for unions back to the 75% level of the 1950s.

Further evidence of increasing support for unions comes from a 2018 survey on “worker voice,” which found that nearly half (48 percent) of non-union workers say they would vote for a union compared to about one-third in surveys conducted in 1977 (33 percent) and 1995 (32 percent).

“The State of Working Pennsylvania 2022” outlines two concrete ways that unions representing a third or more of the workforce could mesh with today’s economy and politics and underpin a new period of shared prosperity. One way is by achieving significant density in locally rooted industries that can’t flee to other places because their customers are near their current locations—industries such as higher education (e.g., the University of Pittsburgh), coffee bars (e.g., Starbucks), health care, business services (e.g., janitorial and security guard services in Pittsburgh and Philadelphia), in-person retail, education from zero to adulthood (pace distance learning), construction, the restaurant and hospitality industries, and last mile/local distribution. Since capital flight is not an option in these sectors, if unions gain a big share of the market in any geographical area they can raise wages, benefits, and working conditions in that area even if they have no presence in other geographical areas. Research shows that unions with high density in non-mobile private industries can raise wages and benefits a lot, transforming janitorial jobs for example from $10 per hour with few benefits to twice that level with health care and a retirement savings plan. Moreover, non-mobile industries are a huge share of our economy today. Despite globalization (and in part because productivity growth keeps shrinking the manufacturing employment share, now below 10%), non-mobile sectors account for a majority of jobs and a larger majority of low-wage jobs.

The second way, foreshadowed by recent organizing, that unions could become more influential in wage setting is by coming to represent all the frontline workers at companies such as Starbucks and Amazon. Unionization of giant companies could follow a path like manufacturing unions’ path in the 1930s. For example, the organizing of one plant in Flint, Michigan, in 1937-38 led to union recognition throughout General Motors, contributing to the unionization later of Ford and Chrysler. At some point in the 1930s, manufacturing workers on a mass basis began to sense that “wait a minute, if we all join a union, together we can get a better deal and better treatment.” Once manufacturing workers generally perceived the practical possibility of a new and better world of work, unionization in the original New Deal had reached a take-off point. (Box 2 in “The State of Working Pennsylvania,” profiles a Philadelphia food service local union featured in this story that illustrates how the confluence of organizing in non-mobile industries and giant companies could fuel mass organizing.)

An observation made by organizer and writer Jane McAlevey in her book Raising Expectation (and Raising Hell) suggests why we could be approaching a take-off point for mass union organizing. McAlevey writes, “Movement moments…happen when large numbers of people…are truly pissed off and there is no other option, or because for some reason the horizon of what they think they are capable of achieving suddenly expands—or, most likely, a combination of both.” The more that workers’ organizing today fuels a belief in the practical possibility of a better future—one that blends area-wide unionization in local industries and union contracts in giant companies—the more workers’ horizons will expand and the more organizing will spread like wild fire. Once workers perceive in a concrete way that “wait a minute, if we all join a union, together we can get a better deal and be listened to on the job,” unionization in today’s private sector could reach a take-off point.

A higher level of unionization in Pennsylvania and the United States could become baked into the economy through multi-employer, area-wide bargaining in local service industries and single-company bargaining in large national or regional companies. Higher industrywide standards for wages, benefits, working conditions, and worker input on the job would thus spread through a mix of multi-employer agreements and loose “pattern bargaining,” whereby unions use bargaining victories in other industries and/or places as a reference point and a source of leverage to achieve similar terms. Innovative new organizing would also likely spark increased organizing and bargaining success among long-established unions—e.g., in construction, grocery stores, and possibly even manufacturing (although capital flight and the real threat of disinvestment will continue to make organizing challenging in manufacturing).

On the political side, growing union membership could strengthen labor’s political power and influence over public policy. Strength would beget strength. For example, the political power to raise the overall minimum wage or the minimum in specific industries, to expand health care further, to make Social Security more solvent by raising the wage base on which contributions are based, to achieve more aggressive climate action that enables fossil fuel workers to get new jobs as good as their old—these types of gains would achieve progress for workers of every race and gender. They would unify working people, environmentalists, and unions and reinvigorate the New Deal conviction that labor is at the core of a political coalition that benefits people generally.

But to reiterate a point made earlier, a mass organizing wave is a possibility but by no means a certainty. For this reason, for those who seek a return to shared prosperity in Pennsylvania and America, almost nothing in public policy matters as much as whether our Commonwealth and country elect public officials who will have workers’ backs when they seek to organize in potentially transformative ways.

For over a quarter century your support for our work has made a difference in the lives of Pennsylvanians. The futu… https://t.co/VuvCTEYZwG
PBPC 29 November
RT @aclupa: We will not be silent in the face of hate and violence. https://t.co/jdtUuPErlu
KRC_PA 23 November