Keystone Research Center released its annual report on the economy, “State of Working Pennsylvania 2022,” on August 30. This is the fourth installment of our series breaking the report into bite-size pieces. To access the full report and all the resources associated with the “State of Working Pennsylvania,” please visit our SWPA 2022 Resource page.

Since 2013, the gap in earnings for low-wage workers in Pennsylvania (at the 20th percentile), compared to New York, New Jersey, and Maryland, has grown from about 20 cents per hour—near parity—to over $1 per hour.

One big reason for these growing gaps: New York, New Jersey, and Maryland legislators have put their minimum wages on a path to $15 per year, while Pennsylvania’s legislative majority has left the Pennsylvania minimum wage at the federal $7.25-per-hour level despite repeated proposals from Governor Wolf to raise it. As a result of legislative inaction, many low-wage workers in Pennsylvania—roughly a quarter of our jobs and about 1.5 million people—earn well below a living wage.

Pennsylvania remains unique in the region because all six of our neighboring states have a minimum wage above the federal $7.25 per hour as shown in the image below. 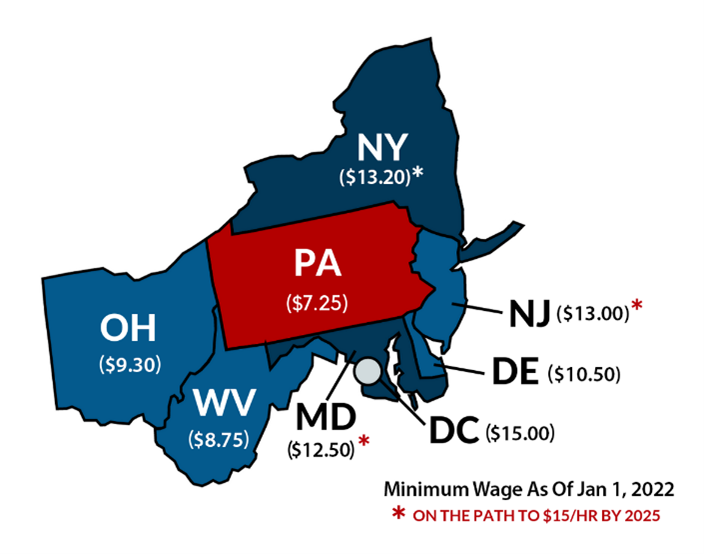 The impact of the differences in state minimum wage policy can be seen clearly in wage trends in our neighboring states compared to Pennsylvania. While wages in the middle and at the top of Pennsylvania’s wage distribution have risen faster than the (weighted) average of wages in our six neighbors, from the 10th to the 40th percentile the opposite is true. (Table 2 in the full report has the details.) Unsurprisingly, the growth in the wage gap, with Pennsylvania at the low end, is more pronounced if you compare us with the three states with minimum wages on a path to $15 per hour: New York, New Jersey, and Maryland. From a mere 20-cent-per-hour wage advantage over Pennsylvania in 2013, the year before New York’s minimum wage first increased, these three neighboring states have seen their 20th percentile wage advantage grow to an average of $1.40 per hour from 2019 to 2021, equivalent to nearly $3,000 per year for a full-time, full-year worker. (See figure 20 in the full “State of Working Pennsylvania” report.)

The full “State of Working Pennsylvania” report shows that even a $15 per hour minimum wage would now be below a living wage—a wage high enough to cover a bare-bones family budget without public assistance—in most counties of Pennsylvania.

This recent news story tells you the positions of Pennsylvania’s two gubernatorial candidates on raising the minimum wage.

For over a quarter century your support for our work has made a difference in the lives of Pennsylvanians. The futu… https://t.co/VuvCTEYZwG
PBPC 29 November
RT @newdeal4us: Join us on Tuesday, Dec. 6th to learn how we can we work together to achieve our principles for equitable…
KRC_PA 29 November