This press release shares the findings of a 50-state analysis of the House tax plan released in November of 2017. The analysis reveals that the wealthiest 1% of Pennsylvanians will receive, by far, the greatest share of the total tax cut in year one and their share would grow through 2027. Further, the value of the tax cut would decline over time for every income group in Pennsylvania except the very richest 1%.

HARRISBURG — A 50-state analysis of the House tax plan released last week reveals that in Pennsylvania the wealthiest 1 percent of Pennsylvanians will receive, by far, the greatest share of the total tax cut in year one and their share would grow through 2027. Further, the value of the tax cut would decline over time for every income group in Pennsylvania except the very richest 1%.

The GOP House leadership continues to tout their tax proposal which will increase the federal deficit by $1.5 trillion over the next decade, as a plan to boost the middle class. But a closer examination of the bill’s provisions reveals that it is laser-focused on tax cuts for the nation’s highest earners. The wealthiest Pennsylvanians share of the state’s tax cuts would grow over time due to phase-ins of provisions that mostly benefit the rich and the eventual elimination or erosion in value of provisions that benefit low- and middle-income taxpayers. For example, after five years, the bill eliminates a $300 non-child dependent credit that benefits low- and middle-income families while fully repealing the estate tax in year six for the very large estates subject to the tax.

While the legislation cuts taxes for most Americans, provisions in it that limit the deductibility of state and local taxes and mortgage interest lead to taxes increasing on upper-middle-class people in some states. Pennsylvania is one of them. Fourteen percent of the households in the 80th to 95th percentile with 2018 incomes between $108,000 and $226,000 will see their taxes go up by an average of $1,780 in 2018. By 2027, 27% of households in this group will have higher taxes, with a tax increase of $2,780. While one might argue that it makes sense to raise taxes on this relatively well-off group to fund public investments in education and health care, there is little justification in raising taxes on this group in order to more deeply cut taxes on those in the top 1%.

“The fundamental aim of this bill could not be clearer: it will primarily benefit the rich, across the nation and in Pennsylvania,” said Marc Stier, director of the Pennsylvania Budget and Policy Center. “They will also add to the nation’s annual deficits which will create pressure to cut spending. Thus tax cuts that mostly benefit top earners will come at the expense of low- and middle-income families, who will ultimately lose more from cuts to education, health care, infrastructure or other public services than they gain from the small cuts they would receive.”

Following are some highlights of how the plan affects Pennsylvania: 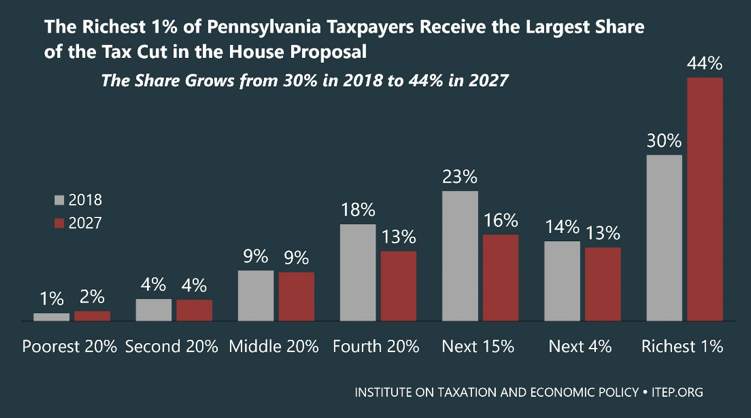 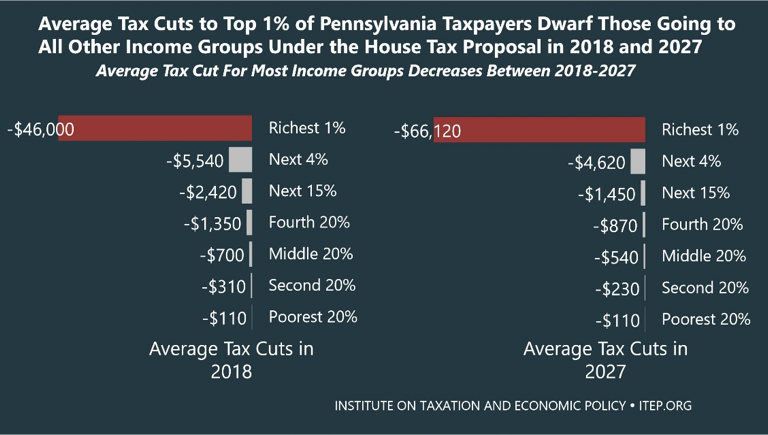 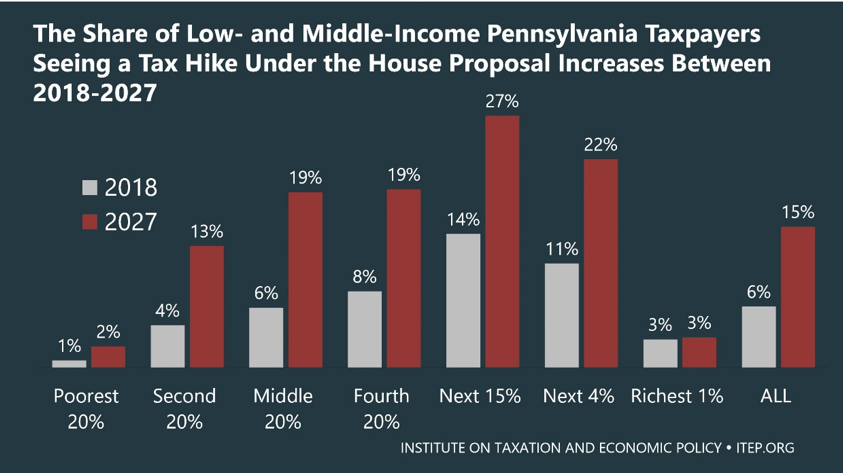 To read the entire report, go to http://itep.org/housetaxplan.