Re: Effects of U.S. Senate Health Care Bill on Pennsylvania

Legislators (like God) make decisions all the time about who shall live and who shall die. So many public policies, from those that control access to medicinal and recreational drugs, to those that set speed limits and safety standards for the roads, to those that help people get a good education — which is also associated with longer life — all have an impact on who lives and who dies.

But they rarely make a decision as weighty as the one the U.S. Senate will make this week when it decides whether to take health insurance away from millions of people who would otherwise secure it through the Affordable Care Act. That decision will, more directly than most, decide who shall live and who shall die.

At a time when both murder and drug overdoses are seen as major social problems, it almost boggles the mind that the Congress of the United States would even consider legislation that will lead to premature deaths at roughly the same rate as those caused by murder and drug overdoses. Can anyone doubt that, if we could eliminate deaths by homicide or cut the rate of drug overdose deaths in half at the cost of the ACA, we would do so? Can anyone doubt that having accomplished one of those feats, no one would think of giving the richest Americans a $600 billion tax cut over ten years if that meant returning to our current levels of homicide and deaths by drug overdose?

How We Calculate These Numbers

A recent report by the Center for America Progress (CAP) has extrapolated from one of the best of those studies — a study of the Massachusetts expansion of health insurance before the ACA was passed prevented one premature death for every 830 who gained insurance — to estimate the impact of enacting the Republican alternatives to the ACA.

The results are striking. CAP calculated the impact between 2018 and 2026 based on 23 million Americans losing insurance, so the number would be only slightly lower than their estimate that there would be an additional 217,000 premature deaths during this period with 27,700 premature deaths in 2026 alone.

CAP also projected the impact in the states. Based on its analysis that 770,000 fewer people would have insurance under the House bill in Pennsylvania in 2026, 936 people will die prematurely that year. Given what we know of the Senate bill, and the projections of coverage losses from the CBO, that seems to be a likely result under its provision as well.

There are reasons, however, to believe that CAP’s estimate for Pennsylvania is low, in two respects. First, we believe that, in response to the Senate bill, Pennsylvania is likely to end the Medicaid expansion in order to protect those on traditional Medicaid. This will result in as many as 1.2 million Pennsylvanians losing health insurance by 2026. If that were the case, premature deaths would total 1,445. Second, there is more recent research by the same authors of the Massachusetts report that found that one life is saved for every 239 to 316 adults gaining insurance. Extrapolating from the mid-point of that range, if 770,000 fewer people have insurance in Pennsylvania in 2026, 2,774 will die prematurely and if 1.2 million fewer people have insurance, then 4,324 people will die prematurely. These results are roughly comparable to an extrapolation we did earlier this year based on previous work by the same authors, in which we estimated that an additional 3,250 Pennsylvanians would die prematurely each year if the ACA was repealed and 1.2 million fewer had health insurance.

Taking these two sources of uncertainty into account, we estimate that between 936 and 4,324 Pennsylvanians will die prematurely as a result of the legislation before the Senate, with the most likely result in the middle of that range or 2630 premature deaths a year in our state.

How Many Will Lose Insurance

After the CBO Press Released its devastating report on the Senate GOP health care bill this week, we responded with a statement outlining the ramifications of that report for Pennsylvania.

But, we have also updated a report from the Center for American Progress that looked at potential loss of insurance coverage with the House GOP health care bill as its basis to instead look at insurance losses under the Senate health care bill. Now that we know that the CBO projects very similar outcomes for the Senate bill, we can assume these numbers are fair estimates.

As in our previous analysis using CAP’s data, we have revised their work based on our analysis of the political and budgetary circumstances in Pennsylvania. We think that, contrary to the expectations of CAP, enrollment in the Medicaid expansion in Pennsylvania will be ended once the federal government stops providing 90% of the funding for new enrollees and, instead, enrolls them at the roughly 50% rate for traditional Medicaid and then, after 2020, subjects them to a per-capita cap on funding. The CBO has projected that, by 2026, only 5% of those on the Medicaid expansion today will still be on it and receiving a higher level of federal reimbursement. A state with persistent and deepening budget deficits like Pennsylvania, and under the likely control of a Republican General Assembly, will not have the means to fund the Medicaid expansion and won’t have the will to raise taxes to do so.

Thus, our statewide estimate of coverage loss — 1.2 million — is substantially higher than CAP’s estimate of 770,000.

In the early years of health care under both the House and Senate bills, the great bulk of cuts in federal funding to Medicaid will come from ending the higher rate of reimbursement for the Medicaid expansion. While the per capita caps will ultimately cost the state a great deal of money, their bite starts slowly and increases over time. Thus, we believe that, in response to a Republican health care plan along the lines of the House and Senate bills, the state will act to preserve traditional Medicaid for seniors and children rather than keep the Medicaid expansion or the state programs it supplanted. 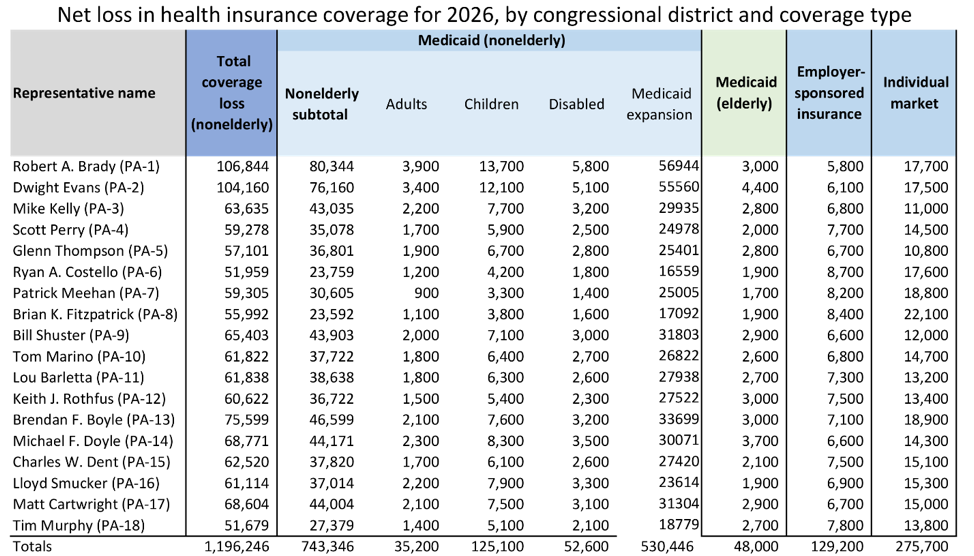