Pizza and the Minimum Wage

Originally published at Penn-Live on April 09, 2019

Spend a little time talking to Republican (and some Democratic) legislators about raising the minimum wage, and they will eventually tell you about their friend who owns a pizza shop and opposes an increase.

We decided to test this claim in two ways.

Every state surrounding Pennsylvania has raised its minimum wage, and two have raised it substantially.

The minimum wage in New York is $11.10, 53% more than in Pennsylvania. In Maryland, it is $10.10, 39% more. If the pizza shop owners who talk to our legislators were right in their economic analysis, pizza shops would be slowly disappearing in most of our surrounding states. And there would be a real shortage of pizza in New York and Maryland.

It’s difficult to get a good count of pizza shops per state. But we asked our affiliates in surrounding states if pizza shops were disappearing and empty stores taking over downtowns and strip malls.

Pizza, it appears, is still easy to find.

We also decided to do a more sophisticated analysis. Pizza shops vary in quality, but Domino’s makes the same pizza everywhere. So we decided to investigate the cost of Domino’s pizza in the capitals of neighboring states and compare it to the cost in Harrisburg. The table below shows what we found. 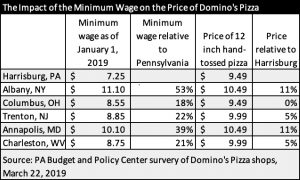 Pizza is barely more expensive in the states that have a minimum wage that’s between 18% and 22% higher than in Pennsylvania. And in Annapolis and Albany, where the minimum wage is 39% and 55% higher than in Harrisburg, the cost of pizza is only 11% higher.
How is this possible? There are five things these worried pizza shop owners are failing to consider:
First, they forget that labor is only part of the cost of making pizza. There is also the cost of flour, tomatoes, and cheese; rent; ovens and the electricity to run them; and cardboard boxes for takeout. An increase in the price of labor doesn’t translate to a proportional increase in the price of pizza.
Second, they worry that if they have to raise their prices by 11%, they might lose business to another pizza shop. They do not realize that if all pizza shops have to raise their prices, none will be hurt.
Third, they don’t recognize that if the minimum wage went to $15 in Pennsylvania by 2027 27% of working people in Pennsylvania, over 1.6 million in total, would get a raise. So more people could afford to buy pizza. It’s possible that pizza shop owners in our neighboring states make a little less per pizza. But it’s also likely that they are making more money because they are selling more pizza.
Fourth, they aren’t thinking about how higher wages and higher (and more consistent) demand for pizza will reduce employee turnover which means employees will become more productive and training costs will be reduced. That will offset the costs of paying them more.

And, finally, when pizza shop owners say they will buy labor-saving devices like automated kiosks to take orders, they forget that people have to design, make, install, and repair those devices and that jobs in those fields tend to pay better than jobs making and delivering pizza. Raising wages at the bottom pushes our whole economy into a faster, higher-wage path to growth.

We have great pizza in Pennsylvania. Contrary to the worries of the pizza shop owners who befriend legislators, a minimum wage that benefits Pennsylvania workers will benefit them as well. And fewer people will go without pizza.

Postscript: We did carry out the semi-serious research discussed above. But the Keystone Research Center did the real thing. They found that between 2012 and 2016 the minimum wage went up in the six states that surround us by an average of 12% after inflation, while it fell by 4.7% in Pennsylvania.

During that same period, real annual weekly wages in food service and drinking places went up by 7.8% in the other six states and only 5% in Pennsylvania. Employment in the same industry went up by 12.5% in our neighboring states and only 6.8% here.

RT @ABCNewsLive: "We're on track to roll out a website next week where you can order free tests shipped to your home,"…
PBPC 13 January
Top 10 List of 2021 Federal Policy Victories https://t.co/iyezmKWNcg 6. Emergency support to keep businesses and o… https://t.co/sMnQ6rR7iD
KRC_PA 13 January