The collapse of Fern Hollow Bridge in Pittsburgh last week vividly illustrated the dilapidated state of infrastructure in Pennsylvania and the United States in a timely way—on the morning of President Biden’s Friday visit to Pittsburgh to highlight the jobs, public safety, and competitiveness benefits of the historic Infrastructure Investment and Jobs Act (IIJA) that the president signed November 15, 2021. The following blog is based on the press statement released by the Keystone Research Center immediately following President Biden’s speech last Friday afternoon.

The president’s address at Hazelwood Green, the site of a former steel mill, focused on the payoff to the new infrastructure law and on efforts to strengthen the nation’s supply chains and revitalize manufacturing in America’s industrial heartland. In the year since President Biden took office, the United States has added 350,000 manufacturing jobs and Pennsylvania 16,000 jobs. KRC estimates that the IIJA will add another 30,000 jobs—direct jobs and supply chain jobs—in Pennsylvania over the next decade (not counting jobs created when workers in infrastructure and supply chain jobs spend their wages.) Many of these 30,000 jobs will be in blue-collar construction trades and manufacturing supply chain jobs.

Thanks to President Biden’s leadership, Congress, after talking about infrastructure for years,  finally got the investments we need over the finish line to prevent more bridge collapses, fill our potholes, and fix our overflowing sewer systems. This will mean jobs for the Pittsburgh region’s highly skilled building trades, precision machining, and other factory workers.

The current economic expansion is already creating jobs that provide an indication of the broad-based manufacturing rebound possible with public investment like (a) the IIJA, (b) the proposed Build Back Better climate infrastructure and work supports bill, and (c) a bipartisan manufacturing bill that passed the U.S. Senate last year.

In Pennsylvania, after the sharp COVID downturn, manufacturers are now adding jobs at places like PA Transformer and All Clad, both southwest of Pittsburgh; Pittsburgh-headquartered Wabtec, which has a plant employing 3,000 workers making locomotives in Erie; the Philadelphia shipyards where specialized ships for offshore wind are being built; and steel plants making the metal for wind turbines and for offshore ships.

Long overdue investments in infrastructure, manufacturing innovation, and climate infrastructure, including modernizing the grid—coupled with Buy America policies—can bolster the Pittsburgh region’s manufacturing sector across the board, in which roughly half of manufacturing jobs remain in traditional strengths in metals, machinery, appliances, and electronic products. University research and start-up companies in robotics, sensor technology, additive manufacturing, and other high-tech sectors are critical, but the vibrant, possible future within reach of Pittsburgh will link high-tech and traditional industries to create more of the good jobs for which the Pittsburgh region hungers.

From a historical perspective, the Biden administration could represent a watershed in the nation’s manufacturing policies. While the loss of steel and other manufacturing jobs eviscerated Pittsburgh and other industrial heartland regions like Youngstown in the late 1970s and 1980s, national industry and trade policy remained hostile to domestic manufacturing. Since the Kennedy-Johnson years in the 1960s, Pennsylvania has lost manufacturing jobs in every single presidential term as the figure below shows. (The figure below updates Figure 1 in this October 2012 report). Since President Johnson, the best performances for Pennsylvania manufacturing jobs in full, four-year presidential terms were in President Obama’s second term and in both of President Clinton‘s terms, partly because these two presidents oversaw long economic expansions. 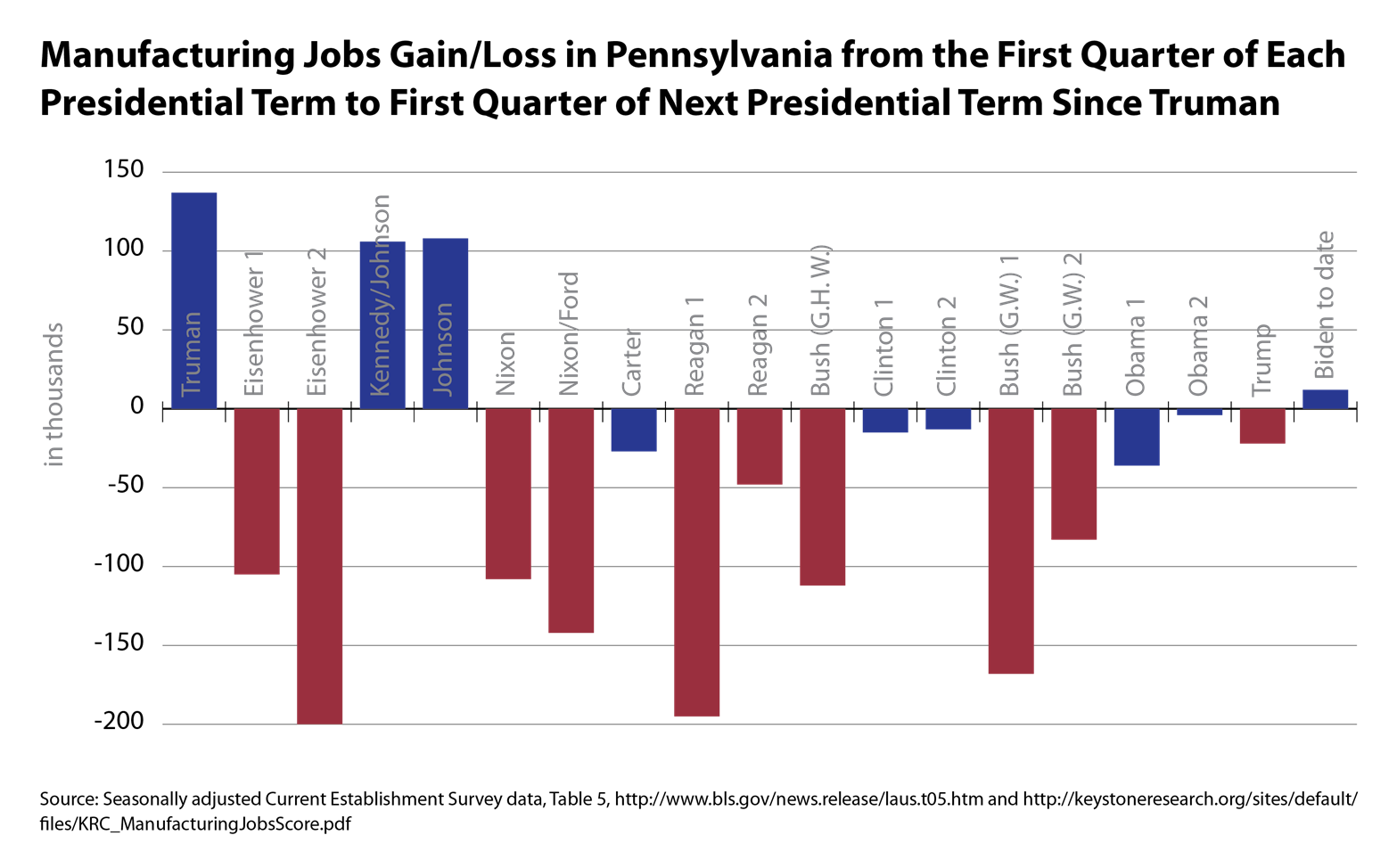 Under President Obama, the Advanced Manufacturing Partnership (AMP), on which the Pittsburgh-based presidents of the United Steelworkers of America and Carnegie-Mellon University served, developed a new vision of a national innovation and manufacturing policy. But with congressional leaders embracing austerity and unwilling to invest in the future, the Obama manufacturing policy lacked resources. President Trump highlighted manufacturing rhetorically and modified trade policies in ways that earned mixed reviews—but he did not enact a comprehensive domestic manufacturing investment strategy.

One possible vehicle for further developing a comprehensive manufacturing strategy is the United States Innovation and Competition Act which passed the U.S. Senate in June 8, 2021,  by the same margin as the bipartisan infrastructure bill (68-32). Innovative features of the Act include investment in university-industry partnerships, in innovation within industry, and in the skills of workers and engineers: “essential innovation workers.” As with other policies, including the infrastructure bill, President Biden’s manufacturing agenda starts with respect for workers and a recognition of the importance of their skills to U.S. competitive strength.