Pennsylvania’s financial outlook for 2022/23 just got better… again! In April 2022, state revenues came in even higher than expected. In March 2022, total revenues were 8.5% higher than they were expected to be at this time of the year, and by the end of April 2022 they rose to 12.4% higher. Our previous estimate, after the Pennsylvania Department of Revenue’s March report, was that Pennsylvania will have a surplus of between $11.2 billion and $12 billion by the end of June 2022. But, as table 2 shows, after April’s rosy financial picture, our updated projection is $13 billion to $15.3 billion.

Fiscal year collections to date for 2021-22 are now $4.5 billion, or 12.4%, above estimates. If in the last two months of this fiscal year, revenues come in according to the estimates of last June, the state budget surplus will be $4.5 billion greater than projected at the start of the fiscal year. However, it is very likely that revenues will continue to come in higher than projections, meaning that the state could end the fiscal year with a total of $6.76 billion more than expected as estimated this week by the Independent Fiscal Office. (See line 2 in table 1 above.)

This means that alongside the budget surplus originally projected in June 2021, the state’s rainy day fund, the remaining American Rescue Plan funds, and extended Federal Medical Assistance Percentages (FMAP), the state of Pennsylvania’s financial outlook is looking very good with a projected total surplus by the end of June 2022 of $13 to $15.3 billion.

Looking forward to 2022-23, if Governor Wolf’s budget were to be adopted as presented, his Executive Budget estimates an ending balance of +$3.4 billion by the end of 2022/23. His budget assumed that the surplus at the beginning of the fiscal year would be $6.4 billion which means that the accumulated surplus would be reduced by $3 billion (see line 6 in table 2). Of course, that amount is based on tax revenues projections from February 2022. The Independent Fiscal Office this week released estimates for projected revenues for fiscal year 2022-23 totaling $42.26 billion. This is $393 million more than the governor projected in his executive budget, and the IFO acknowledges this is a conservative estimate (see line 7 in table 2). Also, word on the street is that the federal government will again extend the national health emergency that raises the FMAP rate, which would save Pennsylvania about $0.6 billion in the first quarter of 2022/23. So, adding together Governor Wolf’s projected ending balance, projected higher revenues, and an expected FMAP expansion through the first quarter combined with the projected accumulated state surplus by the end of June 2022, Pennsylvania is poised to have a surplus of between $10.99 billion and $13.9 billion at the end of next fiscal year on June 30, 2023. 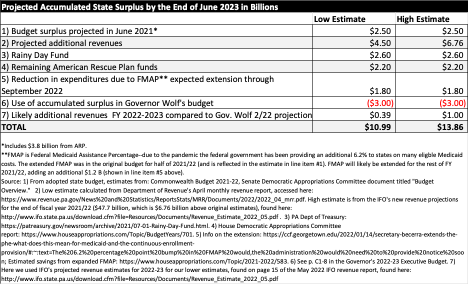 But the question remains: will Pennsylvania’s legislators use these funds to invest in the people of our state and address our ongoing public investment deficit, or will they continue to sit on it? The funds are there. It’s time for the General Assembly to use them to invest in Pennsylvanians still struggling from the pandemic.