As Pennsylvania state budget negotiations come to a close, our lawmakers could achieve a big win by adopting Governor Wolf’s higher education proposal. This win would be a major step towards the PA Promise of affordable college tuition and good-paying careers—and paid for in significant part with federal dollars. This win would be especially beneficial to rural Pennsylvanians and could also help meet businesses’ skill needs in occupations that pay family-supporting wages. It should have overwhelming bipartisan support.

A key element of this opportunity, not widely recognized, is that low numbers of students at Pennsylvania public colleges currently access federal (Pell) grants for college. As a group, our public college students access $271 million less than our per capita share of all Pell grants used by students at public colleges across all 50 states. Governor Wolf’s proposal for higher education funding could trigger more Pennsylvania students to apply for Pell grants to attend college, drawing down part of this $271 million currently left on the federal table. The governor’s proposal would do this because it includes $200 million in state funding for (“Nellie Bly”) scholarships to attend college. These scholarships would be “last dollar”—they would fill the gap between the non-state financial aid available to students and tuition, fees, and other costs of college. In other words, to access the state scholarships, students would have to first secure their federal Pell grant.

Why do Pennsylvania students under-draw federal support to attend public colleges? The explanation for this little-known fact is very well known: Pennsylvania drastically underfunds higher education and has a big geographic hole in its community colleges coverage of the state. 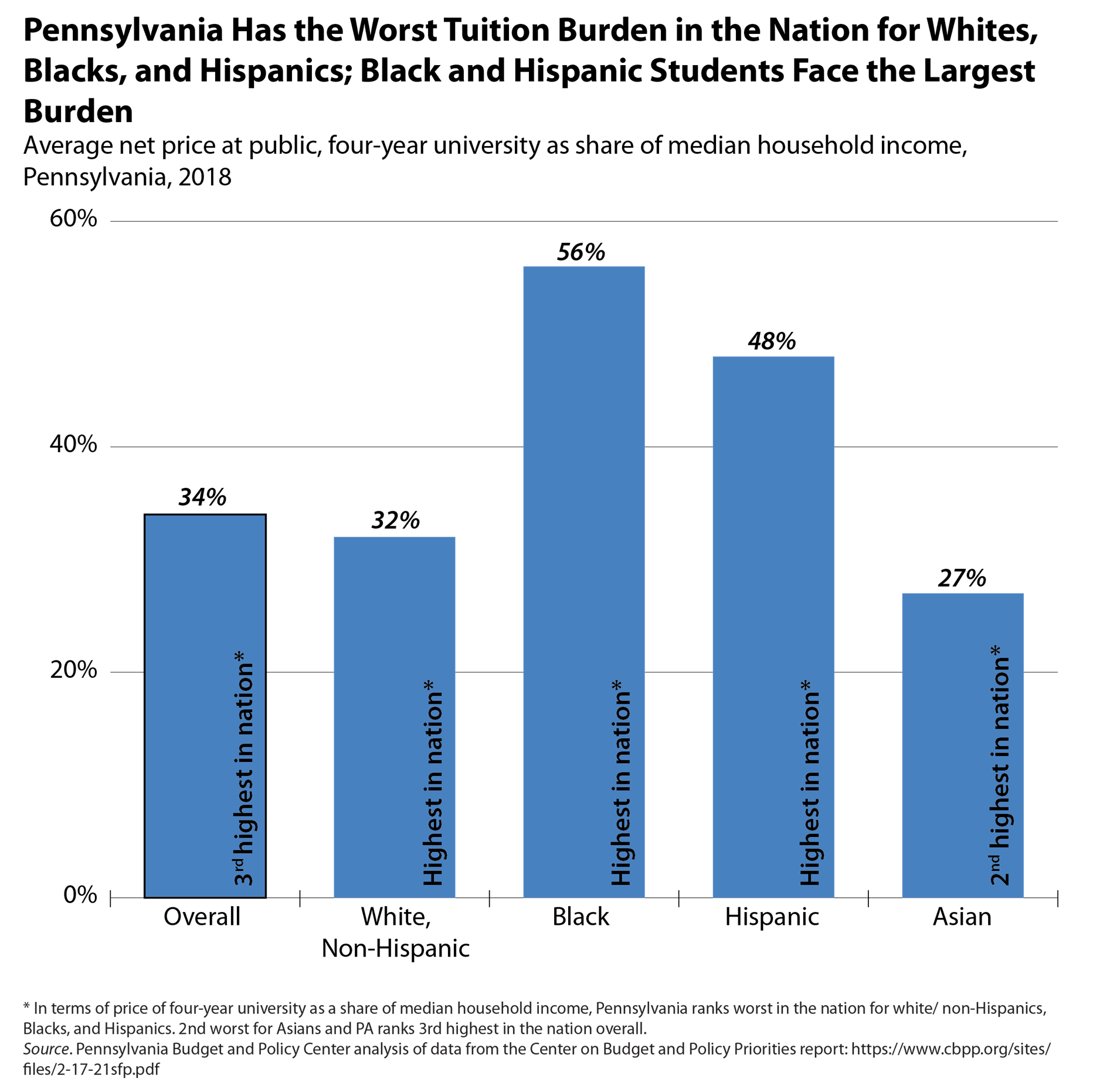 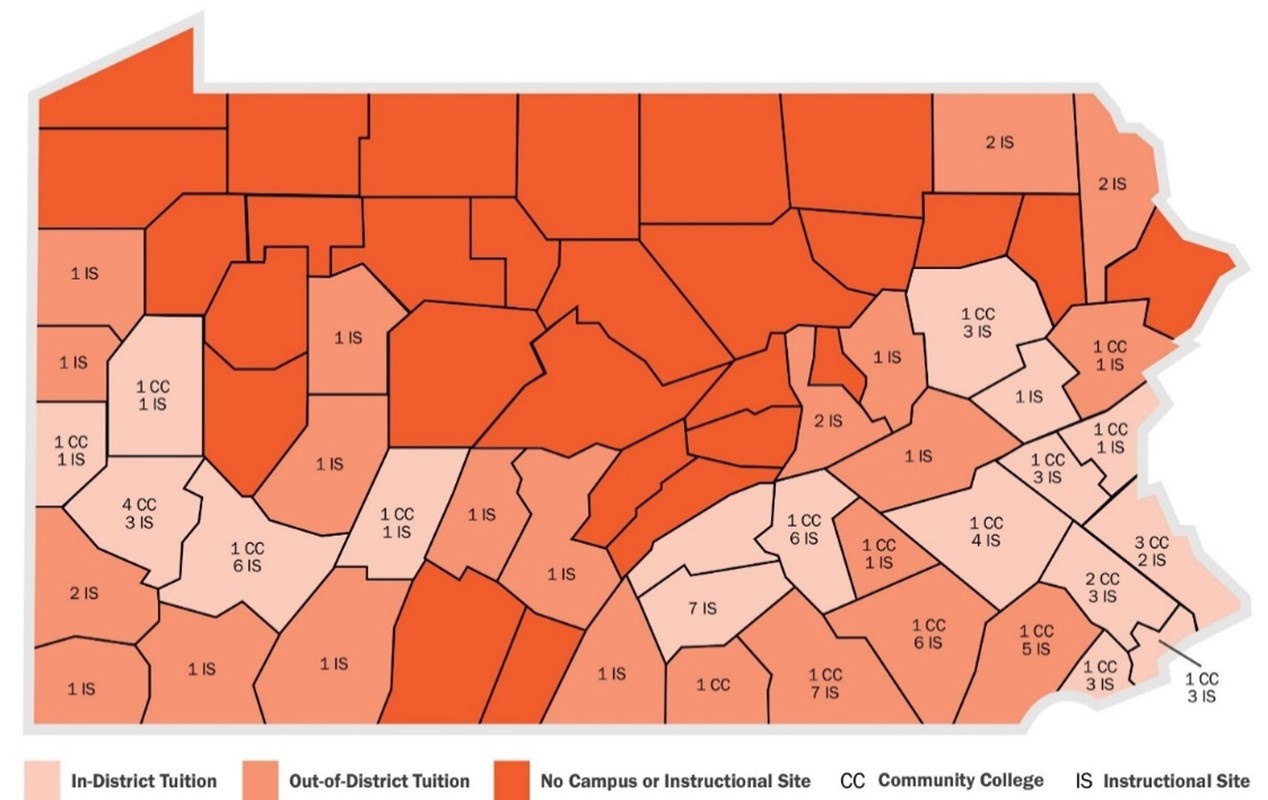 *Dauphin, Cumberland, and Perry Counties share a community college district, as do Lehigh and Carbon. Students in these counties pay in-district rates whether they have a primary campus in their county or not.

Another way to see these counties low use of Pell grants is in the map below, which shows what percentage of high school seniors in each of our 500 school districts complete “FAFSA” forms to apply for federal assistance to attend college. In Pennsylvania’s northern tier, most districts are shaded yellow or brown, meaning less than half, and sometimes less than 20 percent of students complete FAFSA forms. In SE PA and Allegheny County—and neighboring New Jersey—school districts are mostly shaded green, meaning 50 percent to 70 percent of students complete FAFSA forms. Pennsylvania’s rural counties look like northern West Virginia. New York’s southern tier looks like a blend of Pennsylvania rural areas and SE PA/western NJ. 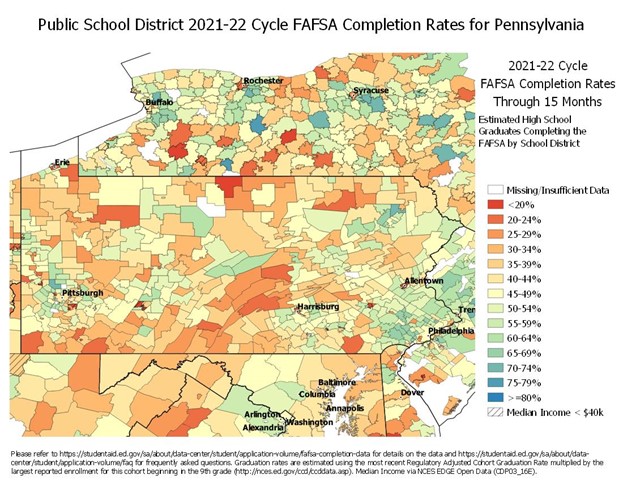 With few students applying for federal financial assistance in rural areas—and tuition high everywhere so no school districts are dark green or blue—Pennsylvania students at public colleges draw only $465 million, not the $737 million that is our per capita share (based on the 19- to 34-year-old population).

The funding for the State System should help moderate tuition increases and increase enrollment.

The critical funding with respect to Pell grants is an additional $200 million investment in needs-based tuition through Nellie Bly Tuition scholarships for full-time students to attend State System schools or community colleges in fields critical to Pennsylvania’s future such as public service, health care or education. As noted earlier, state funds would be “last dollar”—i.e., fill the gap between the financial aid available to students and tuition, fees, or other costs of college. Students would be required to stay in the state for as many years after graduating as they benefitted from the program. If they leave the state early the grants will be converted to (interest-free) loans. According to a legislative memo, these funds would cover 44,000 students:

Nellie Bly: step 1 of systemic reform to “leapfrog” PA higher education to the front of the class

In the build out of a statewide community college system, Pennsylvania can design a delivery system that blends in person and digital classes—as the Northern PA Regional College has been seeking to do (https://regionalcollegepa.org/). Pennsylvania should also address the gaping inequality in compensation between tenured and tenure track faculty and other (part-time, fixed term, and graduate student).

To move in this direction as the state implements Nellie Bly scholarships, the state should provide program development funding to set up Pell-eligible programs in the state’s higher education desserts. The state could designate one entity to do this in each county without even branch campuses of community colleges (e.g., community colleges in neighboring counties, local partnerships that have been building the case for a community college, the Northern PA Rural Regional College, community education councils) using a competitive process where it makes sense and won’t duplicate effort. These entities could be asked to submit a plan for creating a locally sponsored community college within a decade. Apprenticeship programs articulated with college credit could also receive some program development funds to set up satellite/hybrid programs in higher education desserts.

This statewide system building would benefit from existing efforts to develop system-wide articulation between community colleges and State System schools. It should also form the core of the state’s updated higher education plan, currently under development.

RT @BuildingBack_US: We’re lowering Rx costs and getting more folks insured!⚕️ The Inflation Reduction Act will deliver on a promise Washi…
PBPC 7 August
RT @PBPC: Join us on FB Live for the last event of our #KRCGiveDay22 - the finale! Staff and some of our…
KRC_PA 3 August