As Pennsylvania lawmakers wrangle over how our state should use American Rescue Plan funds, we must look at the state’s decisions in allocating earlier federal aid to ensure assistance is reaching those in need. The Emergency Rental Assistance program (ERA1), established with December’s federal aid package, the Consolidated Appropriation Act of 2021, provided funding to states and directly to larger local governments to assist renters in crisis due to the COVID-19 pandemic. However, our state’s distribution of $564 million in ERA1 funds ended up shorting PA counties with more renters and higher rents.

We released a new report this week that detailed this misallocation. Because Pennsylvania followed the federal government’s lead and allocated ERA1 funds based on population, the total of state distributed funds and direct federal funds equaled each county’s share of the state population. This allocation strategy failed to consider the vast differences in the number of renters and the cost of rent between counties.

That Pennsylvania did not consider this variation in rental households per county, led to inequities in ERA1 fund distribution. For example, Forest County received $2,072 per rental household on one end of the spectrum, which is about 5.5 times the funds per rental household in Philadelphia ($373); 5 times Allegheny County ($421); and 4.5 times Dauphin ($446) and Lackawanna ($455) Counties, home to Harrisburg and Scranton respectively. 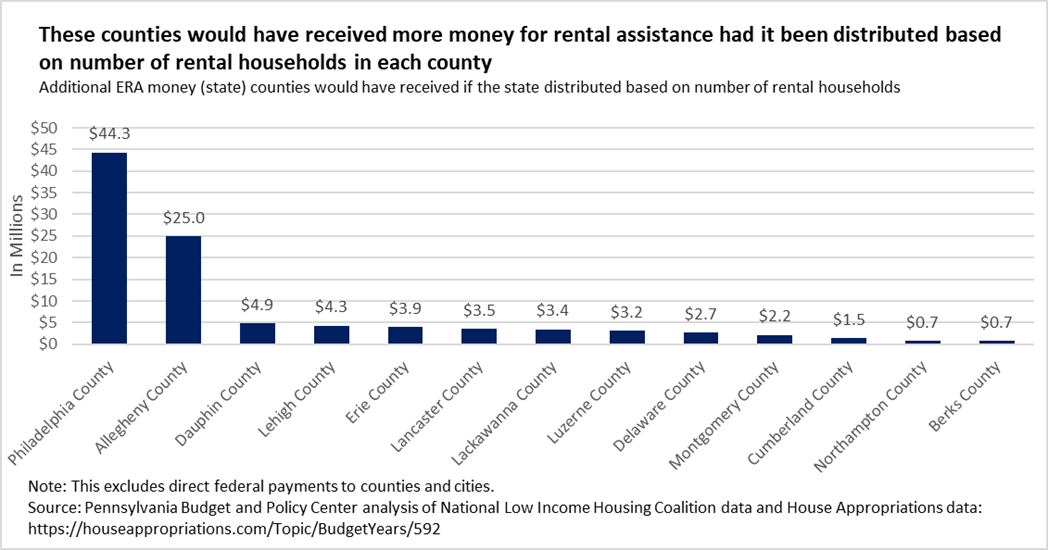 Another factor not considered in Pennsylvania’s distribution strategy is that rental costs vary tremendously between counties. Fair market rent for a 2-bedroom apartment, for example, is more than $1,200 in Pike, Philadelphia, Delaware, Montgomery, Chester, and Bucks Counties compared to just above $700 in counties with the most affordable rental housing. When you look at the dollar difference in each county between the average 2-bedroom fair market rent in that county and the average ERA1 funds per rental household, the disparities are stark. While aid per rental household was $853 LESS than the average rental cost in Philadelphia, in Forest County it was $1,350 MORE than the average rental cost.

This allocation strategy led to Black Pennsylvanians receiving less assistance, generally. Counties, where a higher share of the population is Black, received fewer funds per household than those counties with a lower share. As the figure below shows, counties with the highest Black share of the population (Group 1) received two-thirds ($417 per rental household) of what counties with the lowest Black population share (Group 4) received ($624 per rental household). This inequitable distribution of aid will exacerbate existing racial inequities in housing affordability and stability. 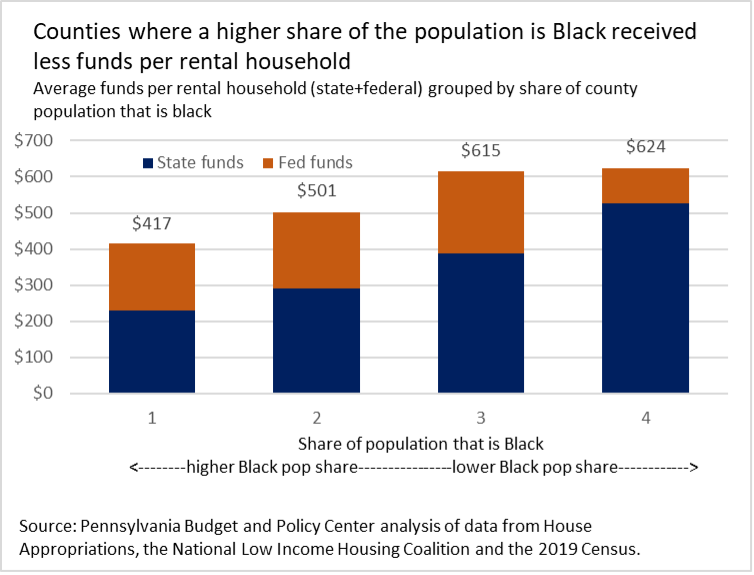 Pennsylvania, however, has an opportunity and a responsibility to distribute the $500 million in Emergency Rental Assistance (ERA2) funds via the American Rescue Plan more equitably. For this round of funding, Pennsylvania should create a fair funding formula that takes into account each county’s share of renters statewide and the varying cost of rent. The Legislature cannot, in good conscience, use a population-based formula with American Rescue Plan dollars—such a strategy will, once again, undercut the benefit of federal dollars going to the places of greatest need and will weaken the impact of this funding which is meant to support those most impacted by our current crisis.