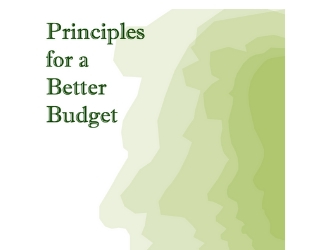 Pennsylvania Budget and Policy Center and PennFuture teamed up to produce the new report, titled “Principles for a Better Budget,” which outlines a series of budget principles to promote a more prosperous Pennsylvania. Pennsylvania must take a forward-looking approach to the state budget that focuses on creating jobs and ensuring our long-term economic success, according to a report Press Released today.

Coming out of the recession, Pennsylvania must take a forward-looking approach to the state budget that focuses on creating jobs and ensuring our long-term economic success, according to a report released today.

With only five days to go until Governor Corbett unveils his 2011-12 budget blueprint, the Pennsylvania Budget and Policy Center and PennFuture teamed up to produce the new report, titled “Principles for a Better Budget,” which outlines a series of budget principles to promote a more prosperous Pennsylvania.

Introduction: Building Pennsylvania’s Future Coming Out of the Recession

Pennsylvania is poised for growth and prosperity coming out of the recession. The Commonwealth ranked third among all states in job creation in 2010, adding 65,000 new jobs. As bad as the recession has been, Pennsylvania weathered it better than most states, with unemployment, on average, nearly a full percentage point below the national average for 35 of the 36 months of the recession.

States that saw rapid growth during the housing boom now face declining fortunes and fading prospects. Nevada, Florida, and Arizona have led the nation in population growth but now lead the nation in foreclosures and unemployment. Texas, long heralded as an example of fiscal restraint, has the nation’s second-largest budget deficit in 2011. It is a lesson we should not take lightly: economic prosperity must be based on granite rather than sand.

Pennsylvania’s stronger-than-average performance through the recession is not an anomaly or a product of luck. It is based on economic policies that invest in communities and families, in infrastructure and innovation, and in clean energy.

State general fund and capital spending account for about 6% of the overall economy—but that 6% is important. It lays the foundation for economic growth and, in partnership with private capital, creates jobs and wealth. It has helped the population—businesses and citizens—to make the difficult transition from a manufacturing economy to one that is more diverse. It has improved our ability to compete in the world of globalized technology, manufacturing, and services. Smart, strategic investments have made Pennsylvania a leader in clean energy and a model for other states.

The recession has created an imbalance between the needs of the citizens and the resources available to pay for them. Like 48 other states, the Commonwealth has seen an unprecedented decline in revenue and record-breaking demand for services. People who have lived the American dream are now relying on food stamps. Our faith has been shaken, in our nation and our government, but we are Americans and we know, deep down, we will prevail, better and stronger.

Like President Obama, Governor Corbett has inherited a battered economy and has choices to make that will determine Pennsylvania’s path well into the future. The state budget is one of the tools at his disposal to create jobs and ensure prosperity. We offer here six principles for a prosperous Pennsylvania. These are a starting point for discussion. They represent a pragmatic alternative path for our new governor, legislature, and state. These principles should serve as goals and values against which to measure the budget that will be announced on March 8 and budget proposals made subsequently.

It is not a secret. It was heavily reported by the Inquirer. https://t.co/35kW7gcv9v
PBPC 5 July
we don’t need the high court leaning in again & again on the side of big corporations & the wealthy. But since…
KRC_PA 5 July