The unemployment rate remains stagnant as it has been for the last few months at 7.3% in Pennsylvania, which is still higher than pre-COVID months.

Finally, according to the economic data tracker at Opportunity Insights, small business revenue in Pennsylvania is 26.4% lower than its level in January 2020.

In a previous blog, we used Pennsylvania data through December 2020 to show that the economy still has a long way to go to recover fully from the pandemic recession. New U.S. numbers for February and Pennsylvania data for January show little change in this picture.

We focus here on two measures—the number of jobs and small-business revenues—both of which are better measures of the economy’s short-run health than the unemployment rate. The problem with unemployment: many people who are jobless in the pandemic don’t count as unemployed.

Both the number of jobs and small-business revenue data show that the economy remains in a deep hole, having recovered only about half the ground lost when the economy dropped like a stone at the start of the pandemic. Small business revenues remain over 25% below the level of January 2020, a stunning Depression-level collapse. The policy message: federal and state lawmakers must continue to provide robust economic relief and then economic stimulus. In other words, it’s a good thing that Democrats in Congress and President Biden just enacted the American Rescue Plan.

The simplest gauge of the state economy’s strength is the number of jobs on the payrolls of Pennsylvania employers. As the next chart shows, from February to April 2020, the state lost over 1.1 million jobs. In January 2021 (the latest state-level data available), we still had about half a million fewer jobs than in February of 2020. While Pennsylvania regained a lot of jobs from April to August, job growth has stalled since then, mostly because the coronavirus surge from October to mid-January made businesses reluctant to reopen and workers reluctant to return to work. The decline in coronavirus cases since mid-January and increased vaccinations may make people more willing to reopen and go back to their jobs, although in the past two weeks the caseload decline has stopped, and cases remain 50% above the rate of the initial April 2020 surge. 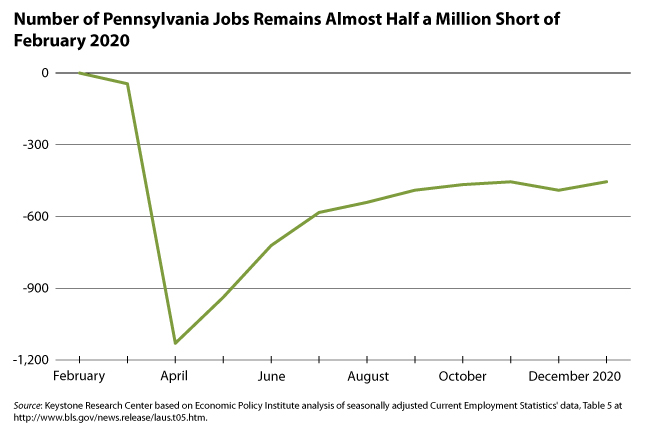 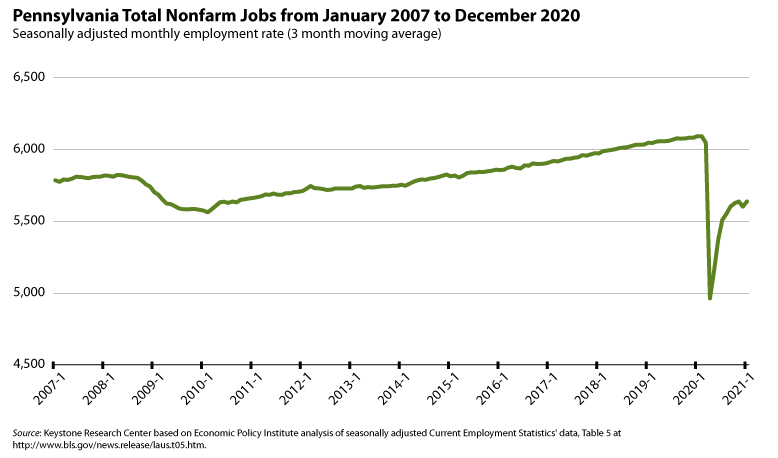 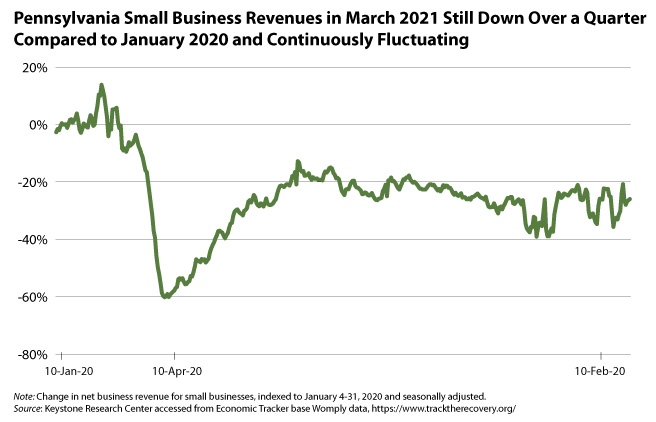 The indicators above make clear that this recession is not subsiding on its own. That’s why we need the additional relief for struggling small businesses and for workers provided in the American Rescue Plan.

The most familiar measure of economic slack is the unemployment rate, and at 7.3% in January in Pennsylvania, it shows that the economy has not yet recovered. This rate has, however, declined nearly nine percentage points from its 16% peak in April 2020—a bigger recovery than in the job and revenue measures that directly track what matters most to workers and small businesses. Polls show that members of the public, including 54% of Republicans, overwhelmingly appreciate the need to provide relief to families and businesses and support the American Rescue Plan. 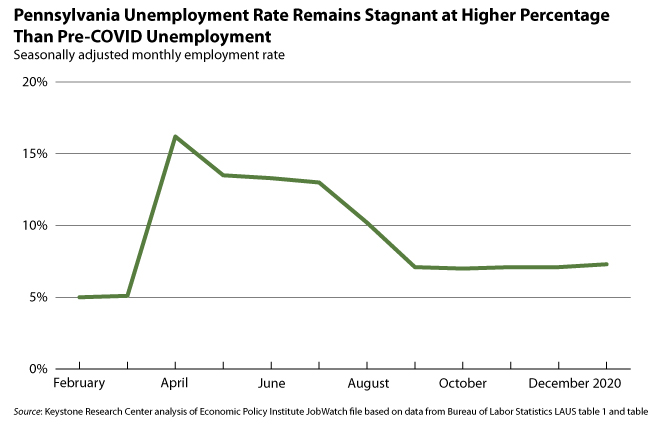