From: Stephen Herzenberg, executive director, Keystone Research Center, co-author of major Congressional Study on the first NAFTA and a negotiator of original NAFTA labor side agreement

Re: Growing trade deficit with China results in continued job losses in PA

All Hat and No Cattle on Trade—U.S. Workers Lose 700,000 More Jobs Due to Growing China Trade Deficit Since 2016; PA Loses 137,300 Jobs, Including in Key NW and SE Congressional Districts
The Economic Policy Institute today released a report showing that trade with China continues to cost the U.S. jobs and that the number of jobs lost has continued to climb since 2016. The growing U.S. trade deficit with China since U.S. entry into the World Trade Organization (WTO) in 2001 cost the U.S. 3.7 million jobs in 2018 and 137,300 jobs in Pennsylvania, most of them in manufacturing, which still today pays workers without a four-year college degree more than other industries.
The new report includes estimates of job loss by Pennsylvania Congressional District (CD). (See the table and two maps.) 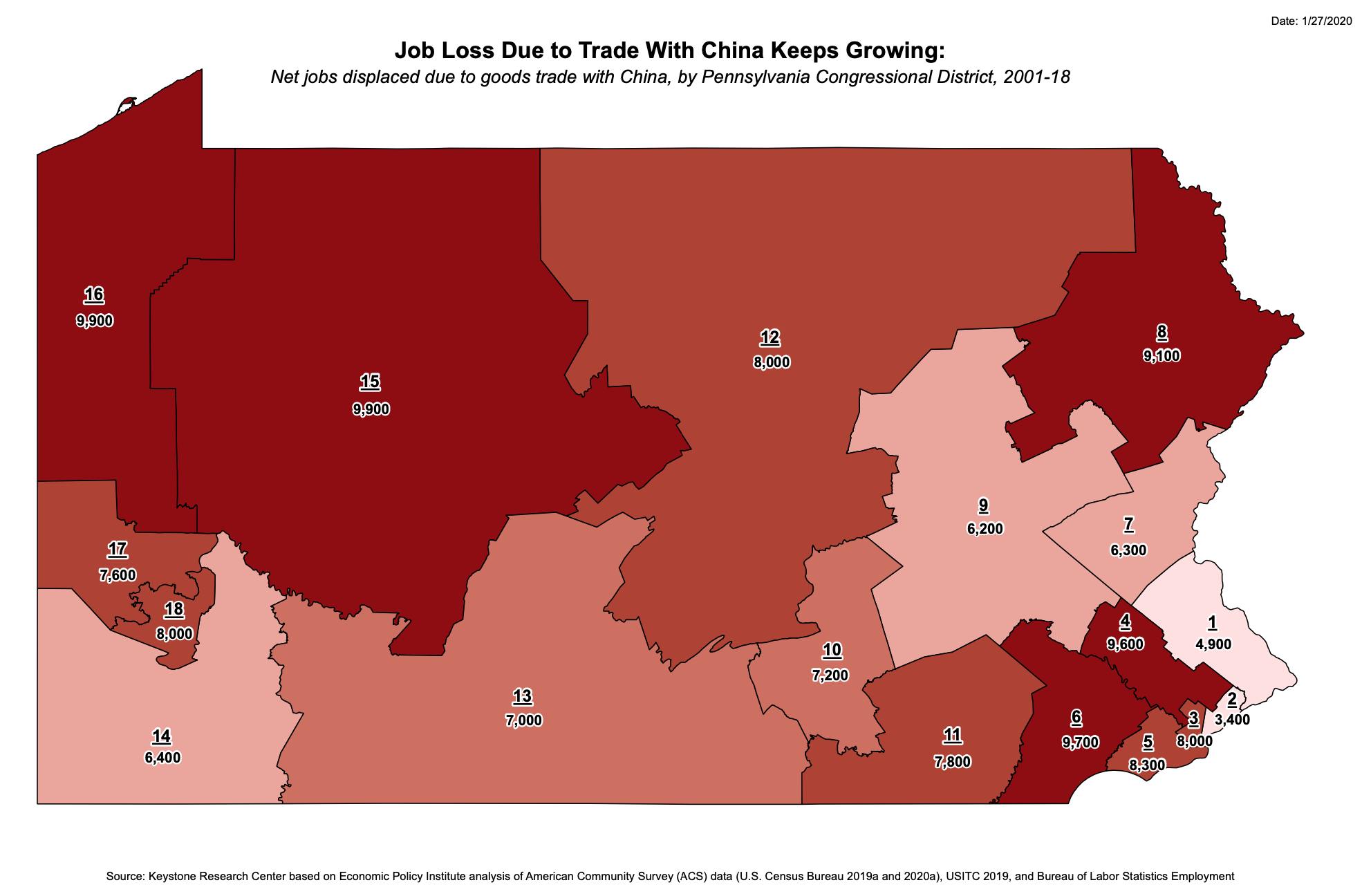 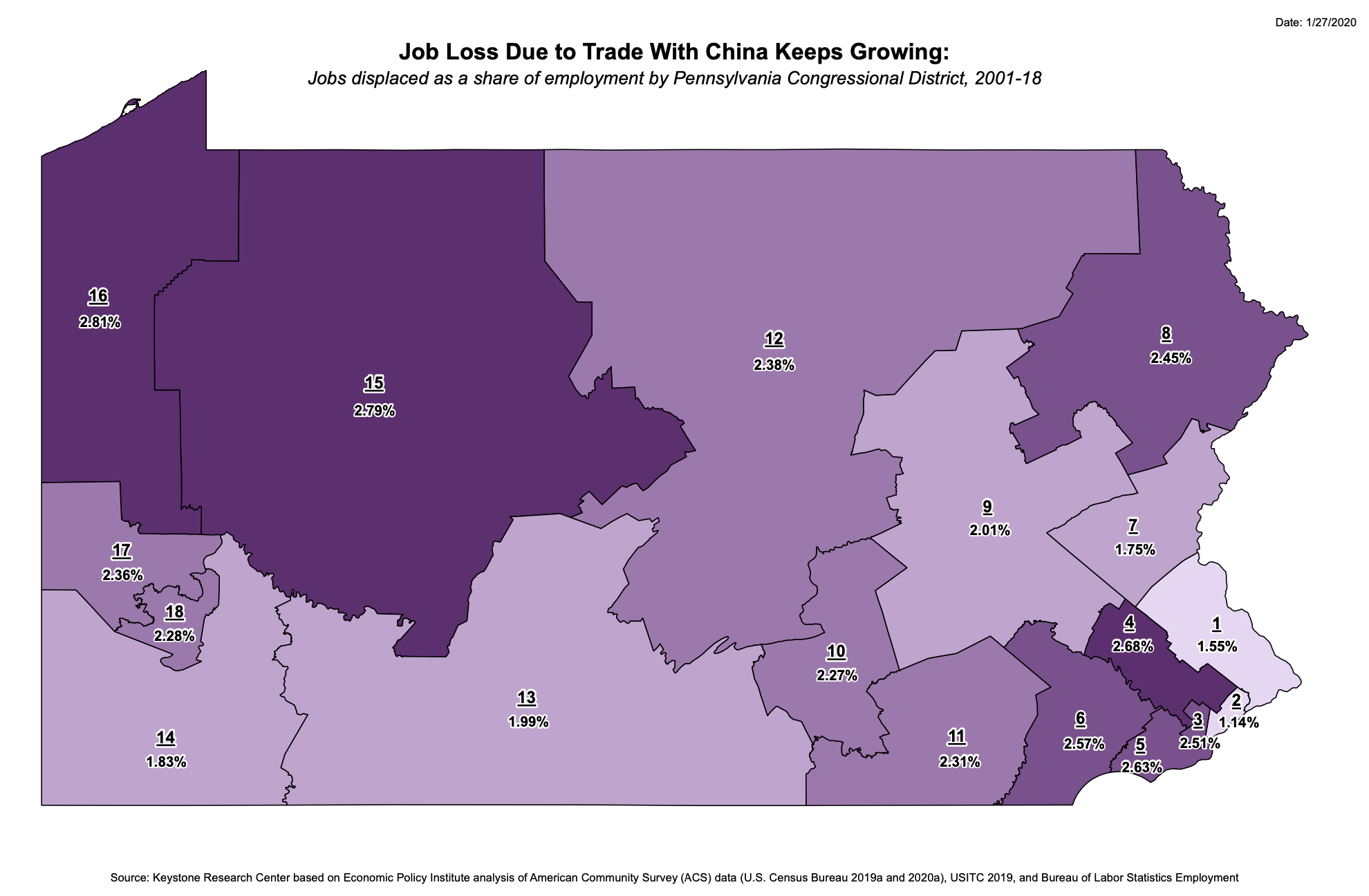 The U.S. still lacks a fair trade policy with China. We’ve had a lot of sound and fury on trade with China and Mexico, but so far it has signified nothing in terms of the jobs and wages that matter to U.S. and Pennsylvania workers.

The EPI model examines job impacts of trade by subtracting the job opportunities lost to imports from those gained through exports. EPI finds that because imports from China have soared while exports to China have increased much less, the United States is losing jobs in manufacturing (in electronics and high tech, apparel, textiles, and a range of heavier durable goods industries) and missing opportunities to add jobs in manufacturing (in export industries including transportation equipment, a major NW PA sector, chemicals, and food and beverages, strong in SE PA).

Following are the key highlights of this report:

To get to trade that really benefits U.S. workers, we need more than posturing. Even the new trade agreement with Mexico is more hat than cattle. Automakers already meet new requirements for production in North America so there won’t be any shift of jobs to the U.S. And the labor provisions are too weak to begin the real process of harmonizing Mexican wages up that should have begun with the first NAFTA in 1994. 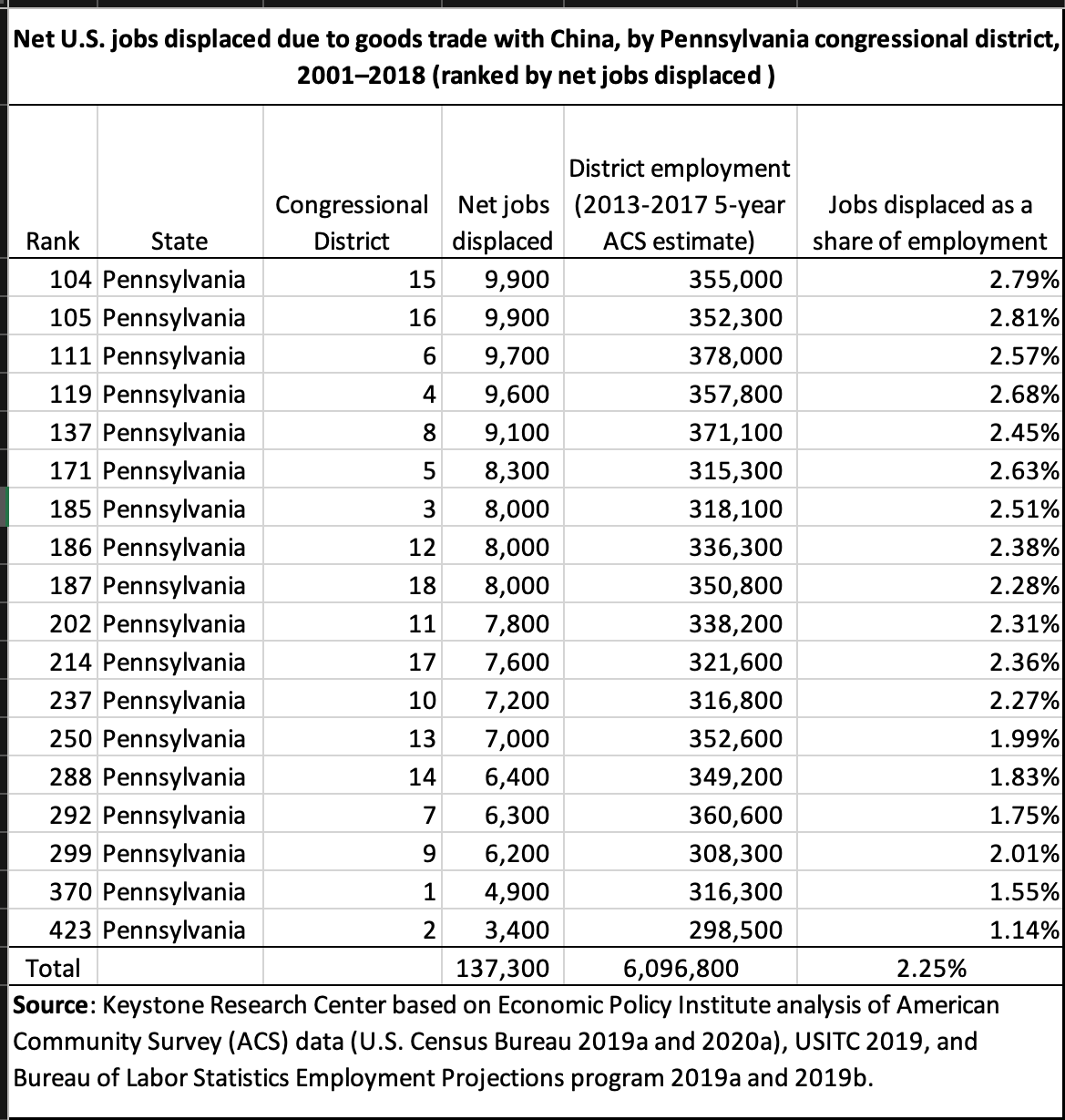