It’s Time to Invest in Affordable, High-Speed Broadband for All

Both Pennsylvania Budget and Policy Center’s education work in Pennsylvania and Keystone Research Center’s work on the four-state (PA, OH, WV, KY) ReImagine Appalachia campaign have underscored the importance of affordable, high-speed broadband. To reinforce this message, KRC used the occasion of a U.S. House Committee on Energy and Commerce May 6 broadband hearing, “Broadband Access: Addressing Disparities in Access and Affordability,” to issue the statement below (edited slightly), drawing heavily on the ReImagine Appalachia white paper on broadband.

“The COVID-19 pandemic has underlined in bright red that high-quality, affordable broadband is a foundation for modern life in America—like access to water and electricity. Without it, businesses may fail, schools and their students fall behind, communities lose population and hope. Without it, we cannot modernize our electric grid, vital to reducing carbon emissions, or spread smart farming.”

To put it simply, with high-speed broadband, many beautiful, rural places could enjoy a resurgence in the wake of the pandemic. Without it, many will spiral down.

In much of our state and our nation, [however,] connection to the internet remains slow and is often too expensive for families, especially in low-income neighborhoods of color and in rural areas. The gold standard for broadband today is 100 mps (megabits per second) for download and upload speeds. As the ReImagine Appalachia campaign’s research on broadband access shows, most Pennsylvania counties and congressional districts have median download speeds below 30 mps and median upload speeds of less than 10 mps. Median upload and download speeds are even lower in the other ReImagine Appalachia states: Ohio ranks in the bottom 20 states; Kentucky ranks in the bottom 12; and West Virginia ranks in the bottom eight. 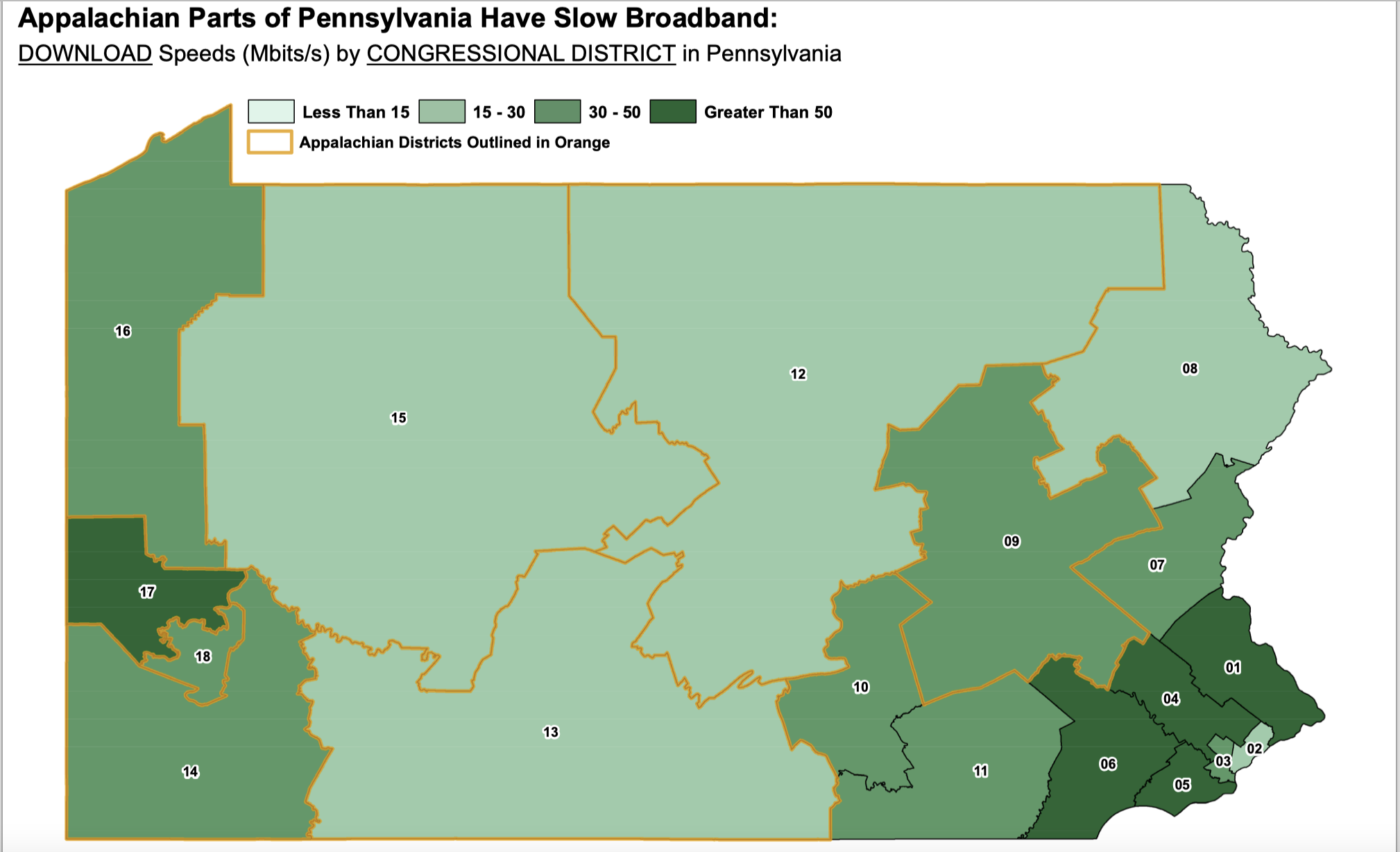 Fortunately, a broad bipartisan coalition now recognizes the necessity of quality, affordable broadband. For example, Senator Joe Manchin of West Virginia is a broadband champion. Echoing the ReImagine Appalachia vision, Senator Manchin has highlighted the potential of cooperatives like the Peoples Rural Telephone Cooperative (PRTC) and municipalities like Chattanooga, Tennessee, to offer high speeds at a low price. Co-ops brought electricity and telephone service to rural areas in the 1930s-1950s. They can help do the same with improved broadband. As Senator Manchin says, “…let a co-op just go out and cover costs. It’s a hell of a lot cheaper and we can do it. There’s ways to do it…and we just got to be committed.”

In addition to high speed and affordability, ReImagine Appalachia outlines six other principles that should guide federal policy. These include making parallel investments in digital inclusion programs to help the least-connected residents and small businesses acquire affordable high-speed broadband and ensuring that public funds create union-wage jobs and protect union rights for trades workers who build out high-speed broadband and permanent workers employed by internet providers.

Congress has the perfect opportunity right now to make the broadband gold standard available and affordable for all while creating an estimated 5,530 good jobs in Pennsylvania alone. Every single member of the Pennsylvania, Ohio, West Virginia, and Kentucky congressional delegations should publicly and enthusiastically endorse this part of the federal infrastructure package.”

As well as its direct benefits for businesses, families, and farmers, broadband is vital to achieving an energy-efficient smart grid and is an integral part of the climate infrastructure package we need to get to net-zero emissions by 2050. This comprehensive package was outlined in the ReImagine Appalachia blueprint and summary unveiled in July 2020, all components of which were incorporated into President Biden’s proposed American Jobs Plan.”

The end of our statement highlighted the findings of a study by the Political Economy Research Institute (PERI) for ReImagine Appalachia. The study found that the overall ReImagine plan would create 243,000 jobs in Pennsylvania alone. We can anticipate that the climate infrastructure parts of the Biden American Jobs Plan would also create hundreds of thousands of jobs. It’s time to enact this plan—and to get Pennsylvania and America working again, including to save the only planet we’ve got.

You are just a sick human being. https://t.co/x0i3pBYks6
PBPC 5 July
we don’t need the high court leaning in again & again on the side of big corporations & the wealthy. But since…
KRC_PA 5 July