The American Rescue Plan (ARP) has made significant changes to federal tax policy, expanding and strengthening the child tax credit (CTC) and the earned income tax credit (EITC). President Biden’s American Families Plan (AFP) proposal would permanently extend these changes. Here is why that is a good idea.

The child tax credit was established in 1997—it was first established as a nonrefundable credit of $500 that could be used towards a family’s federal income tax bill. There have been numerous expansions over the years, including increasing the value and making the credit fully refundable (which means it not only offsets taxes owed, it also pays above and beyond what a caregiver/parent pays in taxes). While not a comprehensive solution to poverty, the CTC has been effective at putting more money into the hands of families that need the boost, increasing the amount of money families can hold on to. There were also limits to the CTC, including earnings requirements which essentially excluded families with the lowest incomes. This left behind close to half of all Black (48%) and Hispanic (46%) children in the U.S. and 36% of white children.

The American Rescue Plan has expanded the reach of the CTC so that the credit is larger and so more families can benefit. The plan has increased the maximum credit from $2,000 per child to $3,000 for kids aged six and up and $3,600 for kids younger than six. Also, by changing the limits on refundability and earnings requirements, low-income families now benefit regardless of their income.

These changes to the CTC are temporary via the ARP and are set to expire at the end of 2021. Passing the American Families Plan would make these CTC improvements permanent.

Expanding the CTC would help improve the lives of more than 2.5 million children in Pennsylvania in 2022. Families in the poorest income group would receive an average benefit of $3,500. Those in the second to fourth 20% of income earners would receive between $2,000 and $3,000. 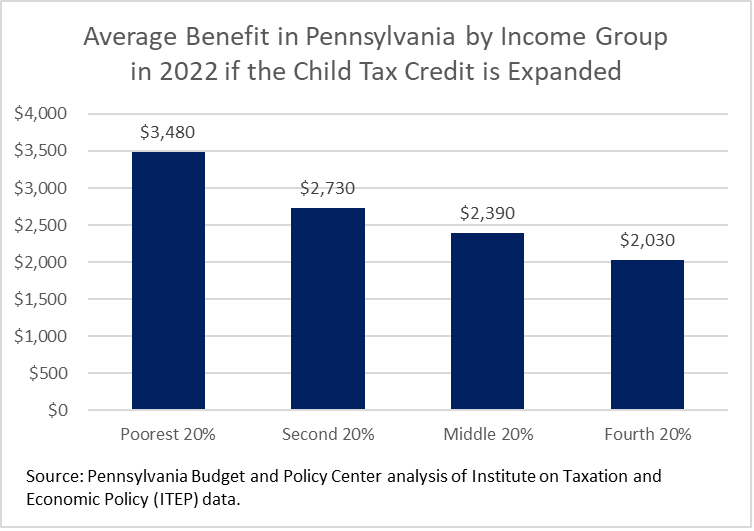 Another American Rescue Plan change has strengthened the earned income tax credit, which is a tax credit aimed at helping low- and moderate-income families. Under the ARP, the EITC amount has been increased for low-income workers without children in the home. (Previously, the credit was very low for individuals.) Other changes include making the credit available to more adults through age and income limit expansions.

These changes are set to expire at the end of 2021, but the American Families Plan would make these changes to the EITC permanent, as it would for the child tax credit. Nationally, this enhancement would provide a $12.4 billion boost in 2022, which would benefit 19.5 million workers. The lowest-income Americans (the bottom 20% of income earners) would receive more than three-fourths (78%) of the total benefit.

We should pass the American Families Plan so Pennsylvania families can continue to benefit from these federal tax changes.