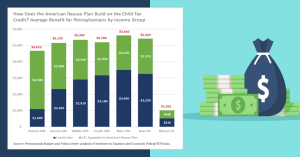 President Biden’s first COVID-19 relief proposal—the American Rescue Plan—includes a significant expansion of the child tax credit (CTC), increasing funding nationally by $125 billion. Expanding the CTC, along with the other proposals in the American Rescue Plan, namely extending SNAP benefits; sending out direct payments of $1,400; and extending unemployment benefits would cut child poverty in half in 2021, according to the Center on Poverty and Social Policy at Columbia University.

If enacted, the CTC expansion would double the size of the existing federal credit for households with children and expand it to include families who are left behind under current law. This expansion would make two specific changes. First, it increases the maximum credit available to families from $2,000 to $3,000 with an additional $600 for children under the age of six, giving most families thousands more in benefits.

Second, the proposal makes the CTC fully refundable, which means that families that don’t earn enough to pay federal taxes would still receive a benefit. Currently the refundable portion of the CTC is limited to $1,400. Full refundability is especially important because most low- and moderate-income families currently do not receive the full benefit since their earnings are too low. In fact, more than one-third (39%) of all children live in families with earnings too low to qualify for the full CTC benefit. The problem is even greater for children of color. Nearly half (47.6%) of Black children and Hispanic children (45.7%) do not currently receive the full CTC benefit because their families earn too little; 36% of white children and 34% of Asian children are also left out. Full refundability remedies this.

The poorest Pennsylvanians would greatly benefit from CTC expansion, as shown by the figure below which is based on an Institute on Taxation and Economic Policy brief. The poorest 20% of income earners in Pennsylvania—those earning less than $12,700 a year—would see their CTC benefits jump from $1,090 to $4,670, increasing these families’ yearly income by over $3,500. Under the current law, around 99% of families in the bottom 20% are too poor to receive the full credit benefit—full refundability fixes this.

The second 20% of income earners, earning between $21,700 and $41,700 a year, would get the second-largest boost of $2,830 additional dollars on average. Middle- and higher-income families would also benefit, receiving an additional $2,000 to $2,400 per year. All in all, an expanded child tax credit as outlined under the American Rescue Plan would reach more than 2.9 million children in our state, substantially reducing poverty in Pennsylvania.