With the release of state job numbers for April 2022, Keystone Research Center is providing an update on key economic indicators in Pennsylvania. The new data show continued economic momentum, with declining unemployment rates and steady job growth. The recovery now encompasses the industries hardest hit by the pandemic, led by the leisure and hospitality industry, and has contributed to steady job growth in Pennsylvania manufacturing.

In April 2022, Pennsylvania’s unemployment rate was 4.8%, lower than in February 2020 (figure 1). While you might expect unemployment to begin leveling off once it reaches low levels, it has continued to decline steadily in the past year.

The unemployment rate, however, is an imperfect measure of the economy because many jobless people do not count as unemployed. The total number of non-farm jobs offers a better gauge of economic strength compared to pre-pandemic numbers. Pennsylvania gained 11,400 jobs in April and 31,300 jobs in the past two months with an upward revision of the March number (figure 2). The state has added nearly 300,000 jobs since the end of 2020, a period of impressive and sustained growth. Pennsylvania, however, remains about 178,000 jobs short of the February 2020 level. 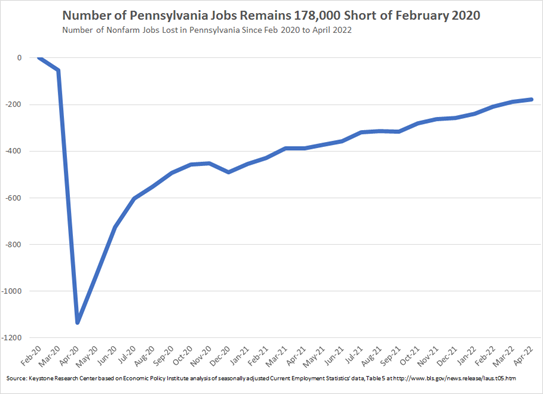 Impact on Employment by Industry

Figure 3 shows the jobs deficit compared to pre-pandemic levels in specific industries. The low-wage leisure and hospitality industry was far and away the hardest-hit industry in Pennsylvania during the pandemic. In recent months, “leisure and hospitality” has seen healthier job growth, although it remains 63,000 jobs short of pre-pandemic levels.

The construction industry has the second-largest drop-off in jobs since pre-pandemic, about 6% or 15,600 jobs on a seasonally adjusted basis. In recent months, construction job growth has been held back by materials shortages, as this U.S. Chamber article noted last September. Looking forward, worker shortages could slow down the growth of construction employment and jobs, even as the demand for construction grows because of the federal infrastructure bill. Pennsylvania needs a plan to expand the pipeline of new and diverse construction workers to high-paying, unionized construction careers, building on programs like the SW Pennsylvania Builders’ Guild’s “Intro to the Trades” program that our Pittsburgh Budget and Policy Center profiles on pages 51-52 of this report. 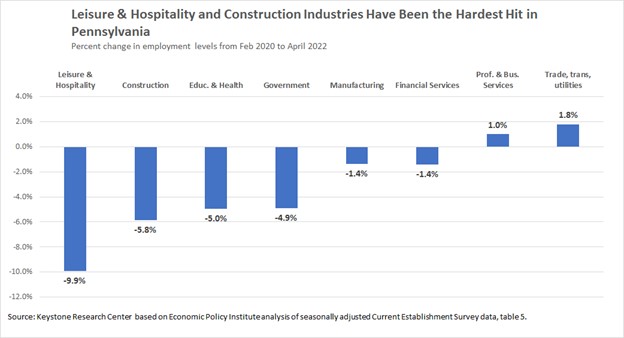 Two industries now have employment above pre-pandemic levels, “trade, transportation, utilities,” and “professional and business services.” The growth of the former likely reflects the expansion of distribution linked with online retail—Amazon and the like. High-wage financial services, in which working from home is an option for many workers, and manufacturing have employment close to pre-pandemic levels.

The economic recovery from the pandemic recession has been much more rapid than the recovery from the Great Recession of 2008-09 because of a more robust federal policy response on a bipartisan basis in 2020-21 and the American Rescue Plan (ARP) passed by Democrats and the Biden administration in March 2021. Even so, Pennsylvania remains about 178,000 jobs short of the February 2020 level. Moreover, federal assistance for small businesses and for working families—for expanded unemployment benefits, rental assistance, and the child tax credit—has ended or is winding down. To keep the economy moving forward, Pennsylvania needs to use its multi-billion-dollar surplus to provide assistance to working families and small businesses and to fund the governor’s proposed $1.85 billion investment in K-12 education. The state should also raise its minimum wage so that lower-wage workers can spend more at local businesses and maintain the economy’s forward momentum.