Drillers Are Right – PA Needs Tax Rate on Gas Like Other States: It’s Time for a Severance Tax

In its recent letter to Speaker Mike Turzai, the Marcellus Shale Coalition points (in paragraph three) to the effective tax rate (ETR) on production as a key indicator of whether Pennsylvania should enact a severance tax in addition to the per-well impact fee we already have.

OK, let’s look at that ETR using Independent Fiscal Office (IFO) estimates of the ETR for 2011-16 and IFO estimates of prices and production to project the ETR (using IFO’s method) in 2017 and 2018.* 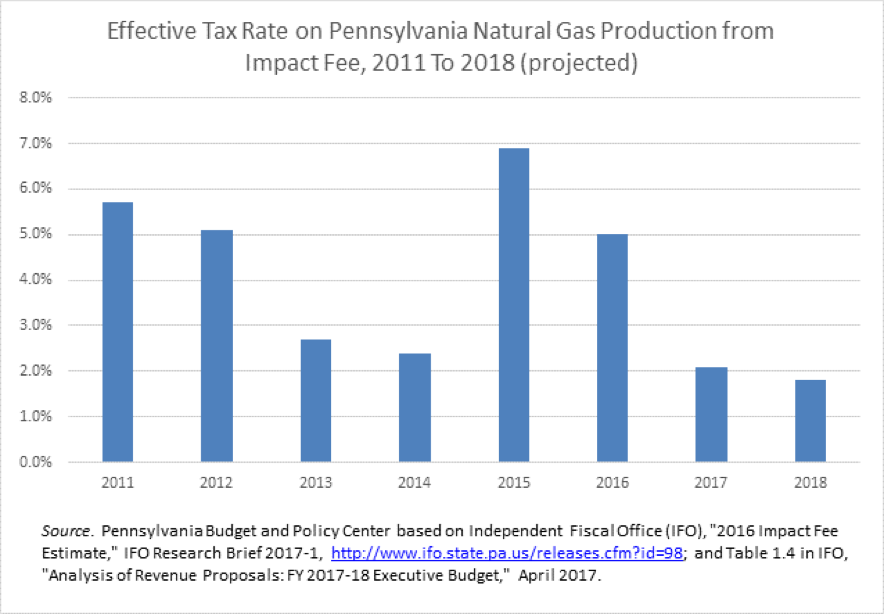 Based on this, the Marcellus Shale Coalition is presumably telling lawmakers that Pennsylvania needs to enact that severance tax like West Virginia’s right now (with a credit for the impact fee).

What’s that? They’re not highlighting the need for a severance tax? No. Instead, they claim that the impact fee alone amounts to a “9.16% tax on production” in 2016 (not sure where they got that estimate) and then they…change the subject. (It’s a bad idea to look into the future – I mean present – when prices are recovering.)

We’ll stay on topic. In 2017 and 2018, Pennsylvania will lose hundreds of millions of dollars because it doesn’t have a severance tax. For example, Republican Kate Harper’s proposal of a 3.5% severance tax on top of the impact fee would raise an estimated $222 million in half of calendar year 2017 and $499 million in 2018.

If we don’t enact a severance tax on natural gas now that will amount to another windfall for the natural gas industry – one that will grow to a cool billion dollars by about the end of the first quarter of 2019.

(*The IFO deducts post-production costs from market prices before calculating the market value of gas that is the denominator for the ETR calculation, the numerator being impact fee payments. Since this deduction lowers the denominator it raises the ETR. This deduction makes less difference to the ETR in 2017 and 2018 because prices are expected to rise.)