If one thing has become clear during the COVID-19 pandemic, it is that workers who do essential work—like providing care for the sick, stocking shelves at grocery stores, and cleaning facilities to keep our buildings clean and safe—are undervalued in our society. Despite this life-sustaining work, many Pennsylvanians earn such low wages that they are unable to pay for life’s basic necessities. Our current crisis gives us an opportunity to address this disconnect.

Pennsylvania’s low-wage workers are at a disadvantage compared to low-wage workers in other states. Many workers in Pennsylvania are stuck in low-wage jobs because it’s been more than ten years since the Commonwealth last raised the minimum wage, which is still set at the federal minimum of $7.25 per hour. All of Pennsylvania’s surrounding states have passed higher minimum wages. Making matters worse, Pennsylvania’s upside-down tax system results in our lowest-wage workers (the bottom 20% of income earners) paying 13.8% of their income on state and local taxes, while the top 1% only pays 6% of their income on state and local taxes.

We must raise wages and strengthen worker protections for low- and middle-income workers.

There is another easy step Pennsylvania can take to support low-wage workers that will make our tax system more fair. Pennsylvania should pass a state earned income tax credit (EITC). The federal earned income tax credit (EITC) is a program that puts more money into the pockets of low- and middle-income families by giving them a credit against the taxes they pay. No federal program other than Social Security reduces poverty as much. Twenty-nine other states have expanded the benefits of a federal EITC by enacting a state EITC. Pennsylvania should follow their lead. A state EITC is a relatively inexpensive program that is easy for states to implement. 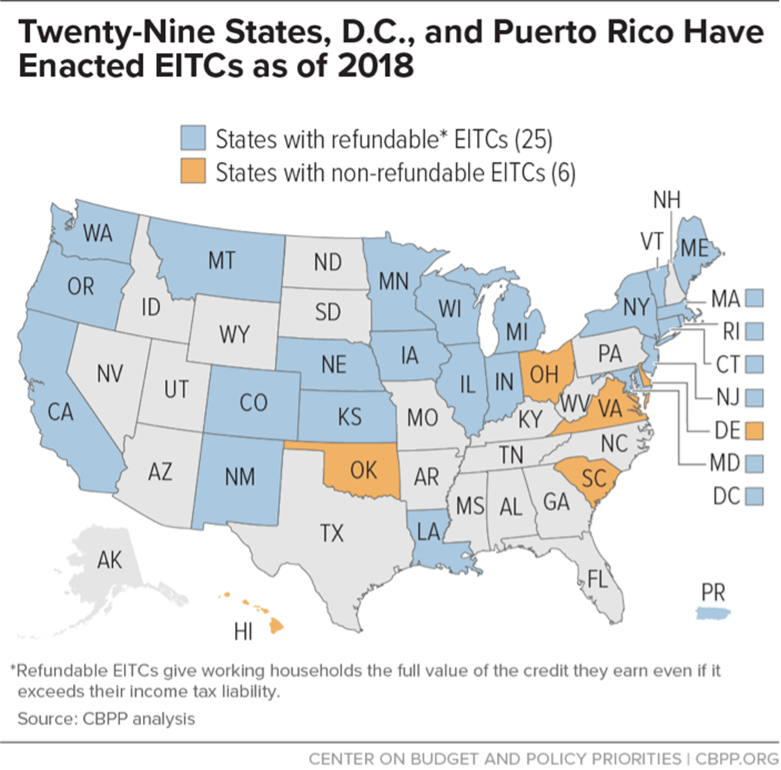 The easiest way to implement a state EITC is to “piggyback” off the federal EITC, making the state’s EITC a percentage of the federal benefit. We modelled setting the state EITC at 20%, 25%, and 30% the federal one—the greater the percentage, the greater the benefit for those receiving a refund. Passing a state EITC would benefit nearly 900,000 tax units (or households) in the state. Of those eligible for a state EITC, approximately 410,000 people would be newly eligible for state tax benefits—that is, they are currently not receiving state tax benefits from the existing tax forgiveness program. The Pennsylvania Department of Revenue estimates a state EITC would result in more than half a million households receiving a tax refund, which would bring much needed additional resources to these families. If we set our state EITC at 20% to 30% of the federal, the average annual tax credit would be between $500 and $800 and would cost the state between about $400 to $600 million.

The benefits of increasing the annual income for low-income families and reducing poverty are indisputable. It improves maternal and infant health, enhances school performance for children, and leads to both higher high school graduation and college attendance rates. The EITC has even been shown to boost future earnings and work prospects for children whose families receive it.

Passing a state EITC would not only help low- and middle-income workers keep more of their hard-earned money, it would also have a stimulus effect during this COVID-related economic downturn, with refunds going directly back into the economy as low-wage workers pay for food, rent, and other necessities. Though it wouldn’t completely fix the problem, passing a state earned income tax credit would also begin to improve our upside-down tax system by lowering the tax burden of the poorest Pennsylvanians. [If we were to also pass the Fair Share Tax in Pennsylvania, higher income earners would pay more in state and local taxes, further flattening out our tax system.] Pennsylvania should pass a state earned income tax credit this year. 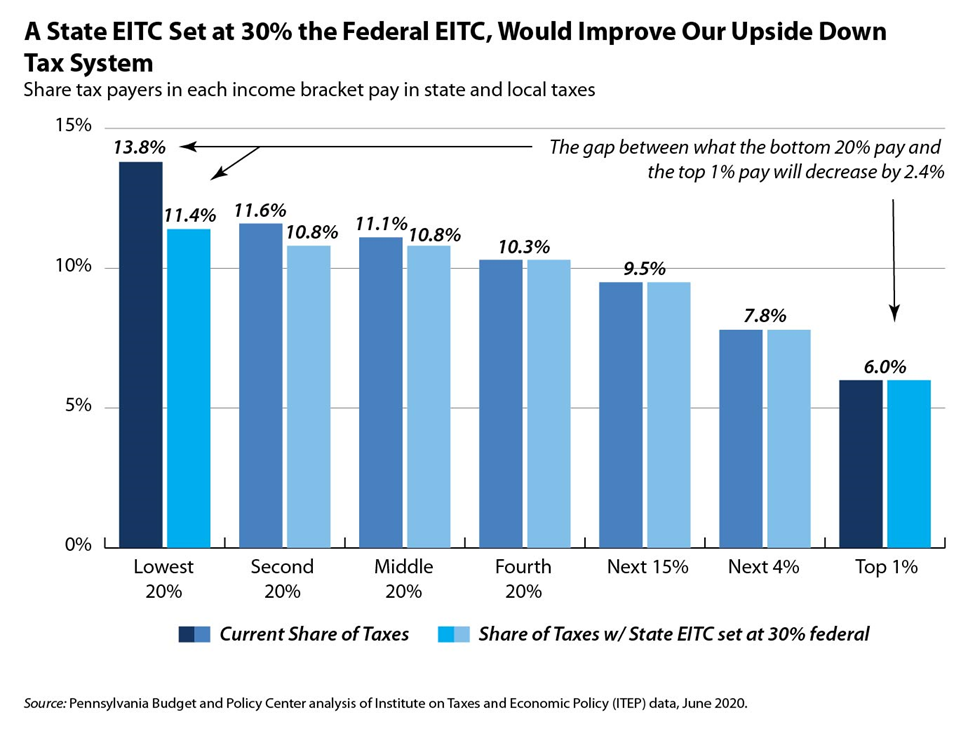