We head into this year’s budget season with one difference from last year: Pennsylvania is flush with cash. What will we do with this opportunity?

We are heading into budget week when Governor Wolf proposes the final budget of his administration. For the last 11 years, we have started budget week talking about the “structural deficit” standing in the way of the state adopting bold new initiatives without raising new revenues. That did not stop Governor Wolf from proposing such initiatives, but the Republicans rejected almost all of them. And they papered over deficits created by deep cuts in corporate taxes with budget gimmicks and one-year revenues.

This year is different. Our state is flush with cash. Let’s take a look at Pennsylvania’s financial outlook as we look towards fiscal year 2022/23.


1 and 2) Pennsylvania’s revenue for FY 2021/22 is coming in greater than expected. The enacted 2021/22 budget estimated that we would end FY 2021/22 with revenues exceeding expenditures by $2.5 billion. Updated revenue projections now anticipate that Pennsylvania will end 2021/22 with revenues an additional $2.2 billion over original estimates. If current trends continue, that might rise to $3 billion by the end of the year.

In theory, Pennsylvania should have a more robust rainy day fund, and this recent investment provides this funding. However, it is important to recognize that we are currently in the midst of a “rainy day.” This $2.5 billion investment into our rainy day fund should be used to address our current crisis.

4) American Rescue Plan funds, as well as other federal relief, provides much-needed funds to address our current crisis. The American Rescue Plan, via the State and Local Fiscal Recovery Funds, provided $7.3 billion to Pennsylvania to meet pandemic response needs and build a more equitable economy as the state recovered. As part of the 2021/22 budget, the state allocated about $4.6 billion ($3.8 transferred to the General Fund) and has a remaining balance of $2.7 billion. 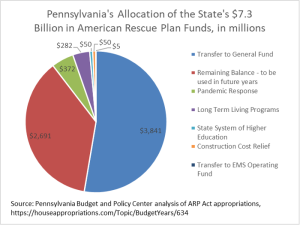 Other federal support via the Infrastructure Investment and Jobs Act (IIJA) passed at the end of 2021, and other packages still being negotiated (Build Back Better) will provide Pennsylvania with an additional influx of funds.

5) Federal support in the form of the expanded Federal Medicaid Assistance Percentage (FMAP) provided Pennsylvania with savings of an estimated $2.4 billion by the end of the year. In order to help states through the pandemic, the federal government raised its reimbursement rate for Medicaid. Pennsylvania’s reimbursement rate, which had been at about 50% of the cost of the program, was increased by 6.2 percentage points. The budget adopted in June assumed that the FMAP rate would continue at a higher level through the first half of the fiscal year, thus $1.2 billion in savings is included in the budget surplus number in row #1. Via the Department of Health and Human Services, the federal government renewed the COVID-related public health emergency through April 16, 2022. Under federal law, the higher FMAP continues through the end of any quarter through which a public health emergency has been declared. So, the 6.2 percentage point bump in the federal government’s share of Medicaid will continue to the end of the fiscal year, reducing General Fund expenditures by another $1.2 billion in this fiscal year, as shown in in row #5.

If the federal public health emergency continues into the next fiscal year, we can expect additional savings.

As we head into budget season with the governor’s proposed budget release next week, Pennsylvania finds itself in a better financial position than expected given the breadth and seriousness of the crisis we’ve faced over the last two years. This status is thanks to the federal government in large part. Pennsylvania should seize this once-in-a-lifetime opportunity.

This week, we saw two major proposals for spending this surplus. Earlier in the week, PBPC stood with House and Senate Democrats in support of a $3.75-billion plan to make K-12 school funding more equitable. Later in the week, Governor Wolf and House and Senate Democrats announced a $1.7 billion plan to use America Rescue Plan funds to help Pennsylvanians have a brighter future: those with low-incomes, small business owners, homeowners and renters, those who are dealing with mental illness, and others, who are still dealing with problems created by the pandemic. Pennsylvania Budget and Policy Center supports this plan and will be talking more about it and other ways we can use the extraordinary, accumulated surplus to make higher education more affordable and accessible, improve job quality and wages across the Commonwealth, and strengthen vital human services.